It’s been over two months since I took this hike, which is blowing my mind a little bit. Tiiime just keeps moving doesn’t it?

In any case, I’m going to recall this trip the best I can because it was bloody freakin’ wonderful and everyone should do it.

I texted my friend Emma, lady-athelete-extraordinaire, asking what her favorite hikes in NH were, and Moat got the vote! Being a bit unnecessarily nervous about doing bigger hikes on my own, I found my good old friend, Eric, and we went out together despite the significant cloud layer and threats of rain (it was just supposed to be the morning!)

First takeaway: inclemate weather is kind of the best.

Look how amazing and dramatic it is! The rain kept hitting us on and off as we ascended the front side of the mountain. It was one of those great situations when the rain stops as soon as you get your coat on, and then comes back as soon as you struggle it off again. Even so, we were beaming when we reached the first summit.

“First summit?” you might be wondering incredulously, well, I’m sure it’s really not that shocking, but I will explain nonetheless.

Moat Mountain, the namesake of the brewery located in Conway, NH that makes a mean IPA, has a total of three summits: South, Middle, and North. The trail runs North/South along the ridge of the mountain, and can be accessed by a few different trailheads. Eric and I, coming from Plymouth, decided on the southern trailhead by hitting 93 North to Lincoln, then taking the Kangamangus highway until I could see a covered bridge to the left, at which point I took it (the bridge) and went down the road until I saw a parking lot on the left. That’s as detailed as my directions are gonna get right now. Here’s a map to help:

Aaanywhoo, the mountain has three summits, any of which are worth seeing. For example, the cairn marking the top of the south summit:

Eric and I did an out and back all the way to the North Summit for a total of 10 miles reaching about 3100 feet. We managed it in 6 hours, a time with which I was very impressed, but hiking goes faster when one has good company.

On a different and exciting note, we also found a grouse on the trail, and not just any grouse (although even that would be enough to make my socks fall off from excitement), but a freaking SPRUCE GROUSE, which is on the NH species of concern list. Whaaaaaaaaaaaaaaaaaattttttttt?!?!?!? 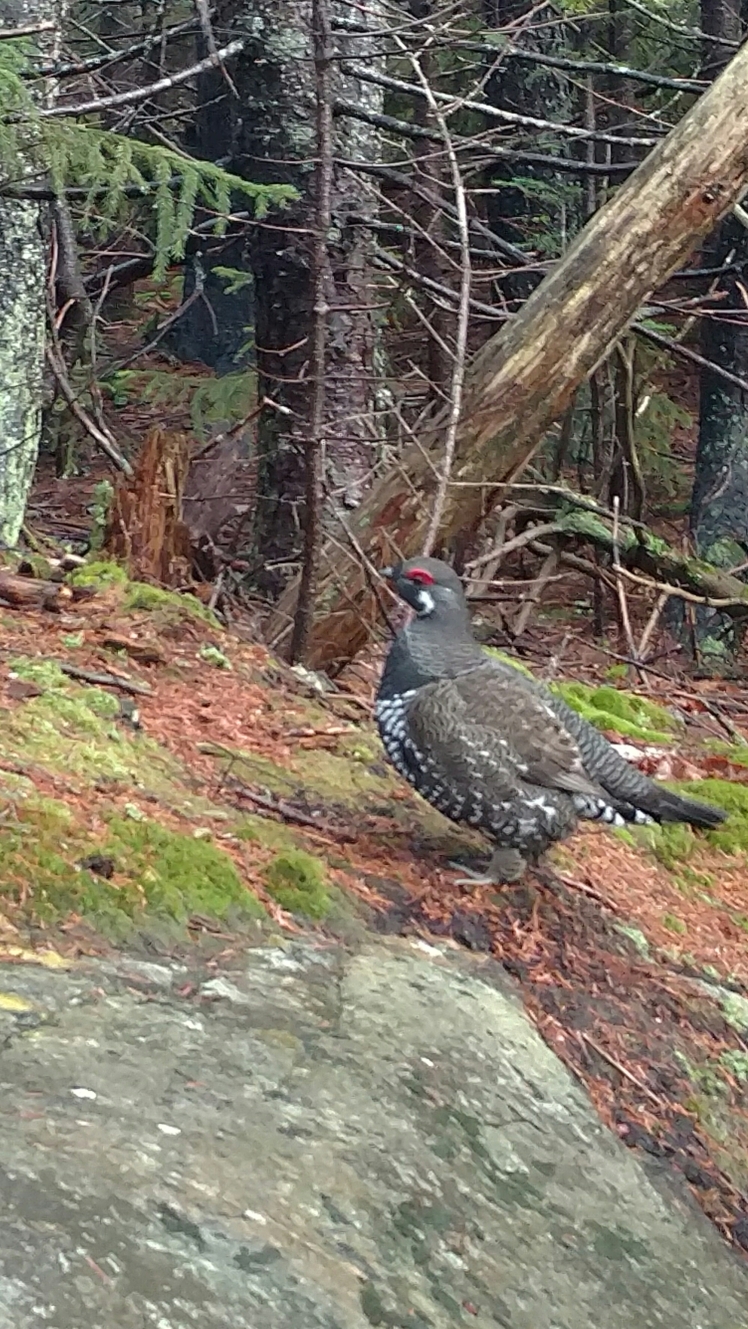 Okay, so I heard this little guy up the hill from us when we stopped to have a snack. I thought he’d be long gone by the time we made it his way, but he was just off the side of the trail, chillin’ out, lookin’ good. I can’t even tell you how many pictures I took, I was just breathless with excitement. I tell you, it doesn’t take much, sometimes.

To wrap up, the wind and the rain and the ridge line and just everything about Moat Mountain reminded me of why I love hiking in New Hampshire so much. By the time Eric and I made it to the final summit, a little rainbow and come out over the Conway valley, and the sun was spiking through the clouds, adding dramatic contrast to the landscape.

2 thoughts on “Moat Mountain; or, I Love Inclemate Weather!”