I fled from Lake Louise, wanting to leave the cold, rain, and throngs of tourists behind me; ironic, considering I was going to Jasper. I drove the Icefields Parkway, remembering vaguely the last time I had been there as a ten year old. I did as everyone does and stopped at the Crow’s Foot Glacier, chatting with a large raven in the parking lot. There’s just something about ravens, man. I know they’re primarily concerned with food (a focus with which I can sympathize), but they have some freaky-intelligent eyes, and their little “click-click crawww,” noises are surprisingly communicative if you actually listen.

Not wanting to be sitting in my car all day, I decided to hop out at the Parker Ridge lot and do the 2.6 km hike. The clouds had been moving in and out as the day wore on, casting the peaks of Jasper into even more dramatic light. The Icefields Parkway is one of many totally improbable roads that I’ve been on this year, and I couldn’t help but wonder what it must have been like before the roads were built, before we could all just hop out of our metal wagons and ascend to a breathtaking vista without weeks of approach. I am at once glad for this as I am critical of it as a modern miracle.

The hike up the Parker Ridge was well-graded, and I had a lot of energy to blow, so I had a fun time breaking a sweat in the cold wind, passing the other friendly visitors as I went. There was a little herd of sheep at the top of the ridge, and an unofficial pathway to the north invited further adventuring. There was a view into the Saskatchewan Glacier, and the peaks separating it from the Athabasca. The wind was positively howling along the ridge, and an impressive little snow storm was forming over the glacier as I made my way up to the high point. There were little rock shelters built up there, presumably to take shelter against the never-ceasing gail. It was here that I was inspired to take a terribly clichéd jumping photo, asking a woman from Ohio to take it for me, with, I must say, impressive results.

The run down from the ridge was quick and fun, and I hopped back into my metal wagon, onward to the Athabasca glacier…which has been turned into a strange, mountaineering Disney-land-esque theme-park-ride-adventure-place? There is a visitor’s center at the base of the hugely impressive, expansive, terrifying and beautiful glacier that serves as the hotspot for tourists to buy bus rides out onto the glacier itself. This is absolutely crazy to me, because the line was huge, guaranteeing a least and hour long wait, and…I guess I’d rather just learn how to traverse a glacier for real rather than have a bus take me out there. Also, that seems crazy dangerous despite the fact that so many people do it.

Anyway, from there it was another two hour, insanely beautiful, though cloudy, drive up to the Mt. Edith Cavell Wilderness Hostel; a place that was much more my style. The hostel consisted of a group of cabins. One served as the kitchen and main meeting house complete with gas stoves, kitchenware, and wood stove- yum! The other cabins were simply bunk rooms that were suited up with a wood stove each and at least twenty bunk beds. It was a relief to be able to cook in an actual kitchen rather than with my Whipserlite out the back of my car- even though there was no running water.

The first night there, the guests consisted of me, Bill from Minnesota, Carlos from Barcelona, Andre from Edmonton, and Sean, the caretaker (originally from NH!). (Names have been changed, just in case.) We had a good time getting to know each other that evening, and Bill, Carlos and I agreed to go for a hike together the next day.

I didn’t feel well in the morning, but decided to head out with the guys anyway. We decided to explore the Edith Cavell Meadows, just up the street from the hostel. We ended up doing baby mountaineering, going completely off track into a scree field below the towering peak of Edith Cavell (so named in honor of the British Nurse). We then headed straight up the wall of the drainage to reach the upper meadows, continuing on to an unnamed auxiliary peak next to Edith Cavell. The peak may have been small and unnamed, but it nonetheless felt like an extreme accomplishment. There was snow, there was free-form, over-land travel, wet feet, a total downpour, and lots of fun. 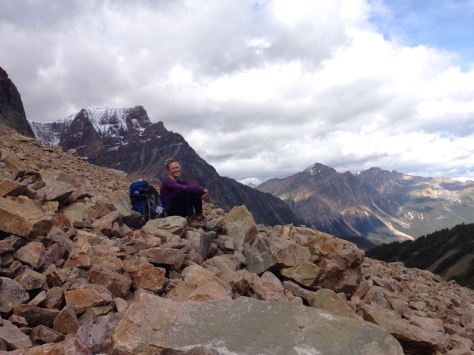 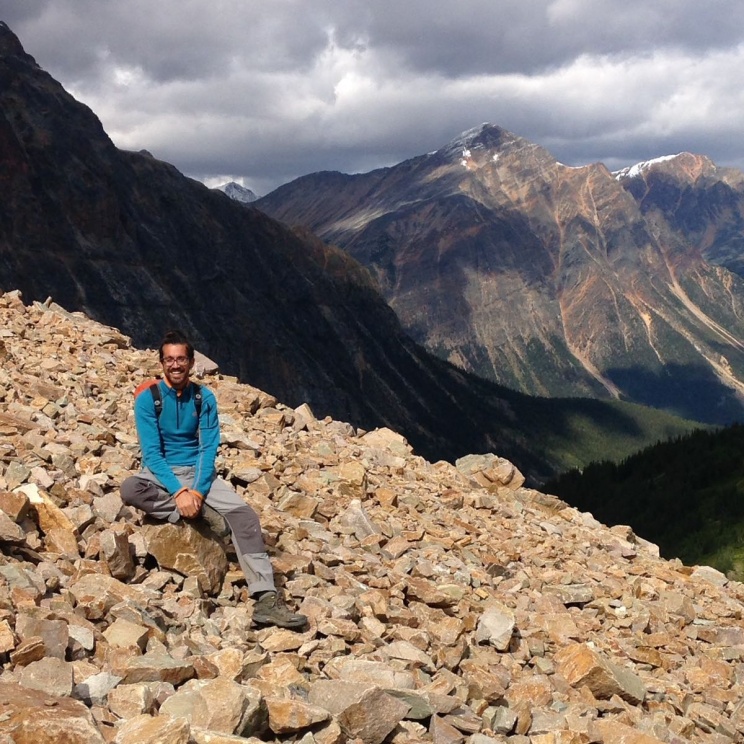 It was very nice to be able to warm up by the fireplace at the hostel after being drenched by the glacial rain. We had a few hours of quiet together after our adventure before the weekend guests of the hostel started pouring in. It was a total 180 from the night before. The main house was packed with people all night. I am filled with satisfaction when I am able to get to know people from different places. There were folks from Canada, France, England, Australia, Spain, and more. While the wind and rain howled outside, we were warm with friendship inside.

The next few days I spent exploring the areas closer to the town of Jasper with Carlos before dropping him off at the train to Toronto. It was 6:30 pm. I wasn’t sure what to do with myself. My next stop was Squamish, but it was getting late, and my park pass had expired. Suddenly, the need to move struck me, and I filled up my tank, changed into my pajamas, and bid farewell to Jasper, following the setting sun into British Colombia, and the next new place.