Jasper disappeared farther and farther behind me as I wended my way out through the mountains, chasing the sun as it set. Suddenly it was 6:00 pm instead of 7:00 pm, and I had crossed the time zone into British Colombia. The Canadian highway 5 became absolutely terrifying once dark had fallen, and I found myself becoming rather drowsy at the wheel, so I stopped off at Clearwater, B.C. to settle in for the night.

The rest of the drive consisted of many stops at fruit stands, getting distracted by beautiful scenery, stopping to do some water coloring, stopping to make food, chatting with a nice man who was a school principle out for a drive on his motorcycle, and wandering aimlessly around Whistler for a hot sec before plopping down out of the mountains and into Squamish. It was full on night by the time I drove in, and I parked at the first lot I could find to get some sleep after a very long, full day of driving.

I woke to the sound of slamming doors and voices right outside my car. I peeked out behind my curtains and saw that lot was now full of vehicles and climbers. I hopped out and found that I had landed at the Smoke Bluff parking lot, one of the main crags of Squamish, located right next to downtown. This kind of providence is was led me to stay in Squamish for the next week. 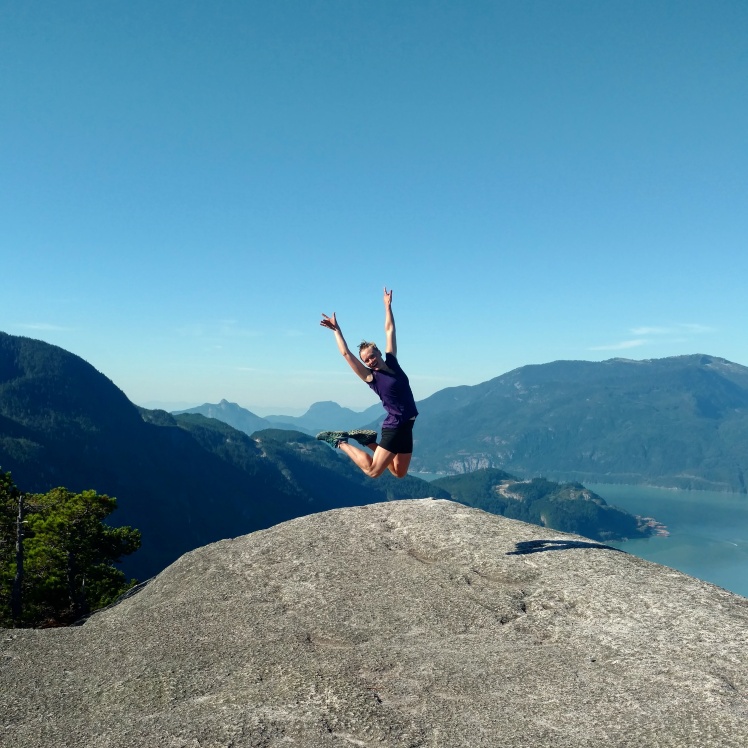 Though at first I was afraid I would not find anyone with whom to climb, by the end of that first day, I had made a friend, Vadim. Vadim invited me to a campfire at his friend’s place. There I met Kyla. The next day I met Shira. Then I met Reuben, then Franjo, Christina, Phil, Britt, Time, Fred Beckey….oh yeah! I went to a safety clinic that was being hosted by Arc’teryx with Vadim, and Fred Beckey just happened to be there.

Being a newbie to climbing, it had to be explained to me just who Fred Becky was. Turns out he’s a pretty neat dude, still climbing at age 93, and a total lady-killer. During a break in the activities, I went up to him, shook his hand, and said, “So I hear you’re famous!” with a smile on my face.

Immediately his companion asked me not to say that to him because apparently Fred Beckey doesn’t like that he’s famous. I apologized to him, still holding his hand, but all he said to me was, “Hm. Strong hands,” after which I took a picture with him.

I’ll just say right here and now that having Fred Beckey say I have “strong hands” is probably one of the best compliments of my life thus far.

Anyway, I ended up meeting a lot of really fabulous, really friendly people living and climbing in Squamish. I had one day of climbing, and then it started to rain…

I did everything I could think to do inside. I read, I wrote, I applied to jobs, I went to a party, I went to the rock gym, I took a shower. Still, it rained. Finally, after becoming stir crazy, I went out and took a darn hike.

The peak that rises out of the mountains to the north of Squamish is called “Garibaldi.” It’s a total behemoth compared to the hills around Squamish, and the view of the peak from the top of “The Chief,” (the dramatic granite cliff that rises out of the eastern side of Squamish) is something to write home about. I decided to do the hike that leads to the lakes at the base of Mt. Garibaldi, and give my legs a stretch.

The trail was good and long, 9 km to the lakes one way, and well populated, so I didn’t feel so nervous about going out by myself. But, after a couple of hours of saying, “Hello, how are you?” to each group I passed every few minutes, I found myself looking for some solitude. The rain had been moving in and out as I walked, but never falling in earnest, and by the time I had reached the lakes and started heading back again, the sun had come out. 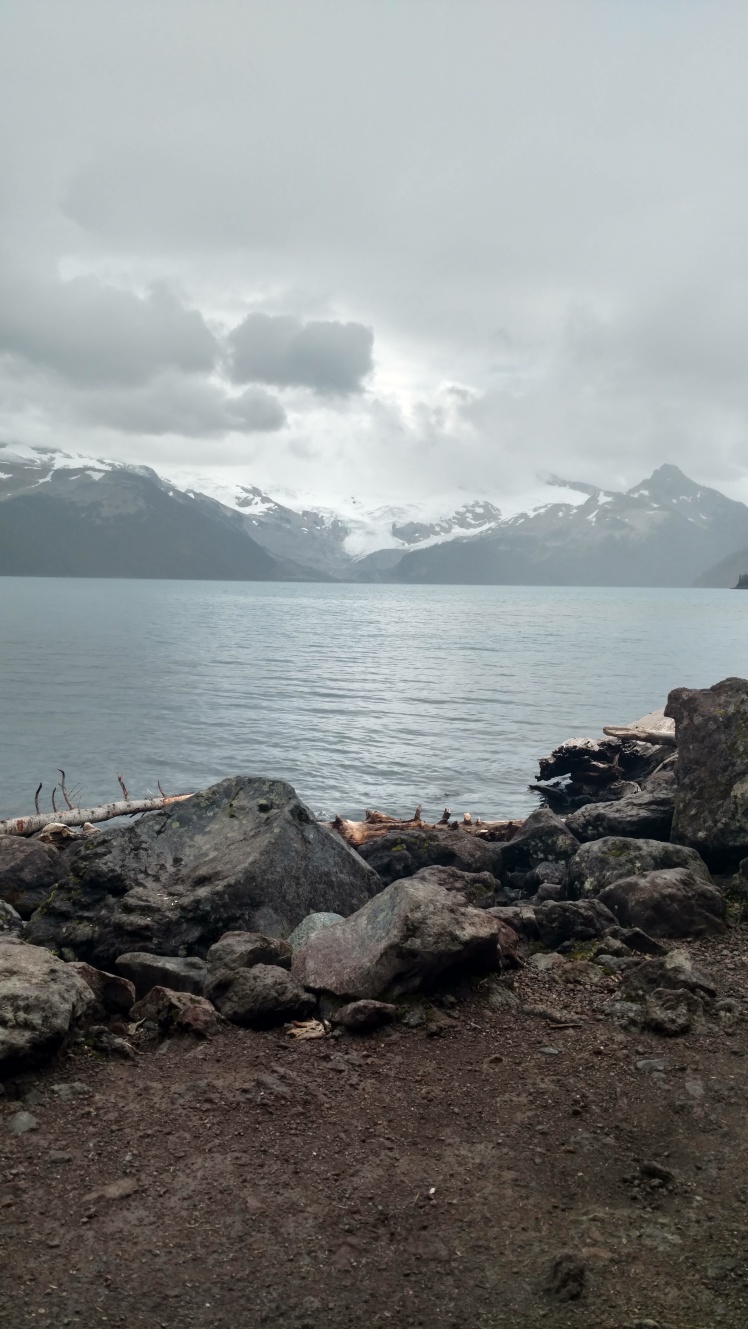 I took a different way back, through the meadows that lead to a peak to the north of the lake. There, I found my solitude. The bright evening sun was blasting through the clouds, illuminating the bright autumn colors that were hiding in those alpine meadows. The air was cool, and that clear, crisp, mountain smell was strong all around me. For the first time in a while, I felt a surge of longing for home, for Fall in New Hampshire.

It was soon going to be dark, and I still had 9 km to go to get back to my car. A thunder storm was due to be moving in, so I skid-addled back to the parking lot. The walk through the woods, so delightful on the way up seemed achingly long on the way down. I did make it back to my car, however, and drove through the storm to arrive in Squamish by the time it had cleared.

The sun would come out tomorrow, and then I’d finally get to climb. 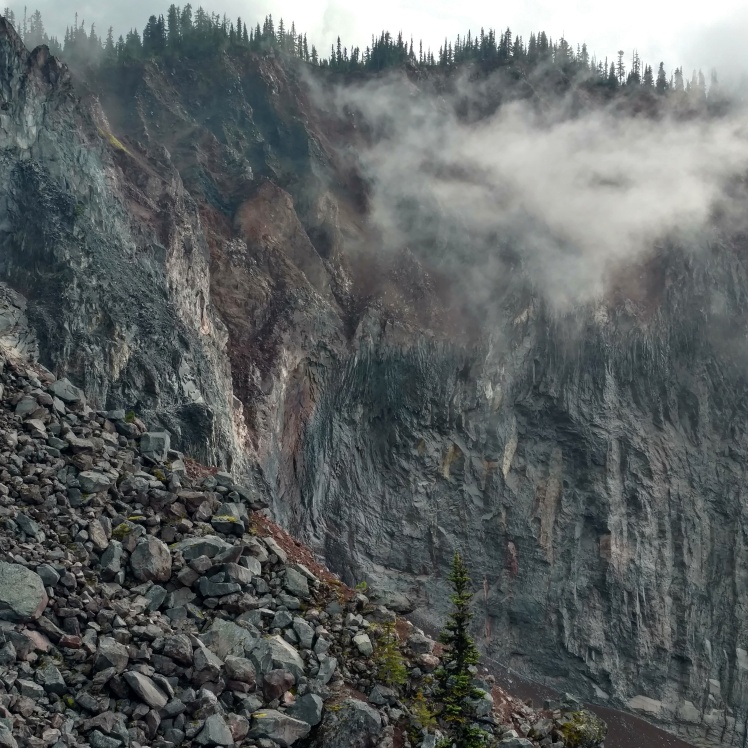 One thought on “Squamish Part 1: And it Rained”