Way back in October I visited the Escalante-Grand Staircase National Monument in Escalante, UT. I had heard about Escalante from my sister, who had spent time there while she was working for the Canyonlands Conservation Corps. The Escalante is no doubt one of the most amazing spots in the U.S., boasting our darkest and quietest location, as well as a plethora of awesome slot canyons, arches and other amazing sandstone features.

I was making dinner outside the Escalante visitor’s center, when a BLM ranger came up to me to ask me how I was doing. His name was Ranger Mike, and he was a very nice man. He ended up sitting down to chat with me throughout my dinner, and we eventually started talking about how the establishment of the Escalante area as a national monument had changed it.

“Oh, man, you’ve got to head over to Bear’s Ears. It’s amazing! But, you know, everyone over there thinks President Obama is going to make it a national monument just like the Escalante, and a lot of local folks are really against it.”

“Really? Why?” I asked, surprised. Protecting such amazing land from mining, development, and other such damaging enterprises seemed like an awesome action to me.

“Well, you see, it’s going to bring in a bunch of tourists, and people who went to live out there to find some peace and quiet won’t have it anymore. More people will come flooding in, they’ll damage the land with their numbers, and we’ll have more car accidents because-you wouldn’t believe how fast people drive through Escalante on their way to Bryce. It’s dangerous! But they’ve gotta get to the “fabulous five!” you know? They’ve gotta get their vacation in! It really puts a lot of pressure on the locals out here.”

“Huh,” I said,  “I guess you’re right. I’d hope that the establishment of a monument would help bring economic stimulus into the communities, though, and protect the land overall?”

Bear’s Ears (so named for the two buttes that stick out from the land and look like…bear’s…ears….) has a very similar type of landscape to the Escalante because it’s all part of the greater Colorado Plateau. President Obama did, indeed, as Ranger Mike had guessed, recently declare about 1.9 million acres surrounding Bear’s Ears as a national monument, forever protecting the land for conservation and recreation. His declaration has caused quite the uproar, especially from the politically conservative crowd. Utah is a rather conservative state, and the president’s recent “land grab,” is evidence of the audacity of the national government’s will to take away state resources. 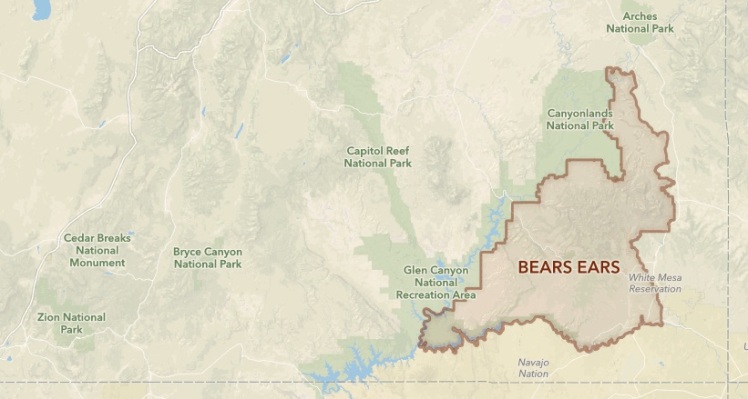 This feels awfully familiar. As Ranger Mike told me: Almost exactly 20 years ago, President Bill Clinton made the Escalante a national monument. Looking at the (super verifiable internet) history sources, President Clinton’s decision elicited pretty much exactly the same reaction for pretty much exactly the same reasons. Which seem to me to be the classic republican principals of state rights over national rights. There’s also a lot of doubt about whether President Obama is even really allowed to designate the monument as such, which was also talked about in 1996. The supreme court ruled that under the Antiquities Act of 1906, the president was, indeed, allowed to protect certain areas of land, a decision that is irreversible under any circumstances. A lot of people also seem to be throwing up arms and yelling for our future President Trump to “say it ain’t so!” and reverse the decision. Once again, however, let’s turn to precedent. History is super helpful, folks.

<< I found out today that the House passed a bill with the purpose of preventing “midnight” rulings from the president. So, just as the congress wanted to prevent President Obama from selecting a supreme court justice, which is his job, by the way, it now wants to be able to overrule any presidential decision made in the last days of a presidency. How history repeats itself…>>

I understand that there are some dramatic pros and cons that come with the designation of national monument, so let’s take a look:

Pros: (these are wild summations)

Okay, so that last one is a little snarky. In all fairness, however, I understand how they might feel. I come from a rural place. I know what it feels like when “outsiders” come into my town and speed down the street. I know what it feels like to see a person take for granted the sacred place I call home. I can feel over-protective, selfish, and self-righteous about all that too.

But, the reality is, folks, that we have an increasing number of people on this planet, which correlates directly with an increasing need to put limits on just how far we take our development. We also need to learn to share. It is my deepest hope and belief that we can all learn to act responsibly and with conservation values out there in the wilderness so that it can stay wilderness.

An added and very important aspect to this situation is the fact that while our representatives and conservative members of our population are upset about President Obama’s “land grab,” the fact remains that the whole idea was proposed by an Inter-Tribal Coalition of Hopi, Navajo, Ute Mountain, Ute Indian, and Pueblo. This is something that the original people of this area want, and it is one of the first ever national monuments to acknowledge and actively pursue partnership with that population. In light of that fact, I can think of no other more just, healing, and hopeful action for our president to take in the twilight of his time in office.