I crossed the Colombia river into Oregon at Biggs Junction, having come out of the desert and over the hills of the Yakima. I thought that I was prepared for the majesty of the Colombia River gorge, having seen into before outside of Portland, but the formation has a totally different look to it east of the Cascades. The walls tower up on both sides of the river, orange and menacing, while the river spreads out wide and deceivingly quiet between. It’s only when the river reaches the Dalles dam that it reveals its true power. Across the mile long dam, great gushes of silt-filled water cascade out of the dam walls, creating an impressive show during the drive-by.

My eventual destination in Oregon was Eugene, but there were a few other stops I wanted to make along the way. I needed to cross the mountains again, but I decided to take the significantly more scenic route instead of the highway to Portland. I decided I wanted to drive across the mountains on a one-lane, somewhat paved but mostly not paved Forest Service road. So, at Hood River, OR, I turned south, and eventually took the Lost Lake Resort road up to Lolo Pass, where the PCT crosses the road.

I have to say that it was one of the cooler drives I’ve done. It was in the woods most of the time, but every once in a while the road would break out into a clearing across which I could catch a glimpse of Hood’s snowy peak in the setting sun. 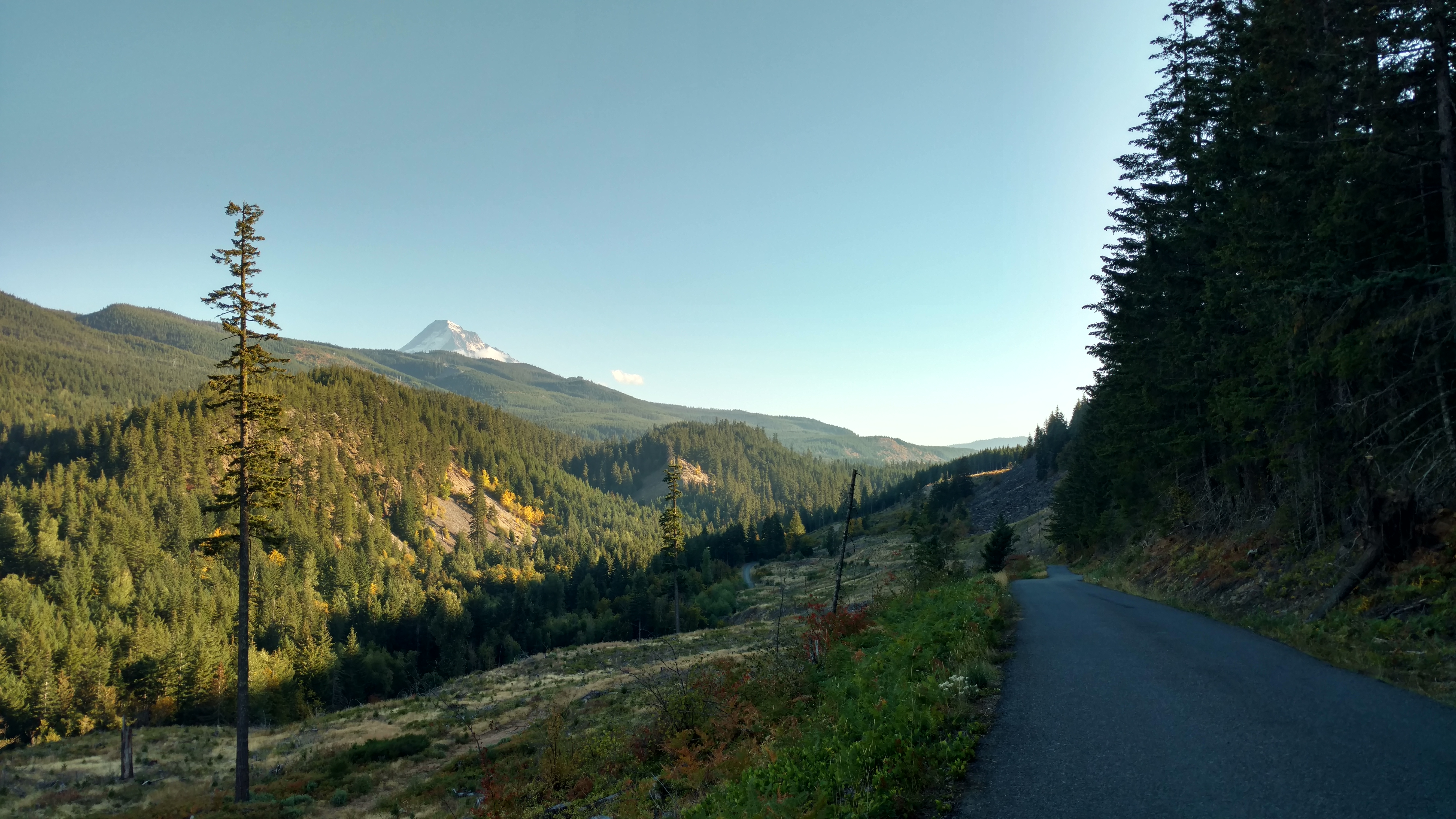 I rolled up to Lolo Pass at the beginning of dusk and was pleased to find a little camp area at this PCT access point. I believe it was the third or fourth time I had crossed the PCT on this trip, and the next day I would finally be setting foot on it again. There was a fantastic view of Mt. Hood between the trees that I tried to capture as the sunset turned pink, but it was a difficult subject. 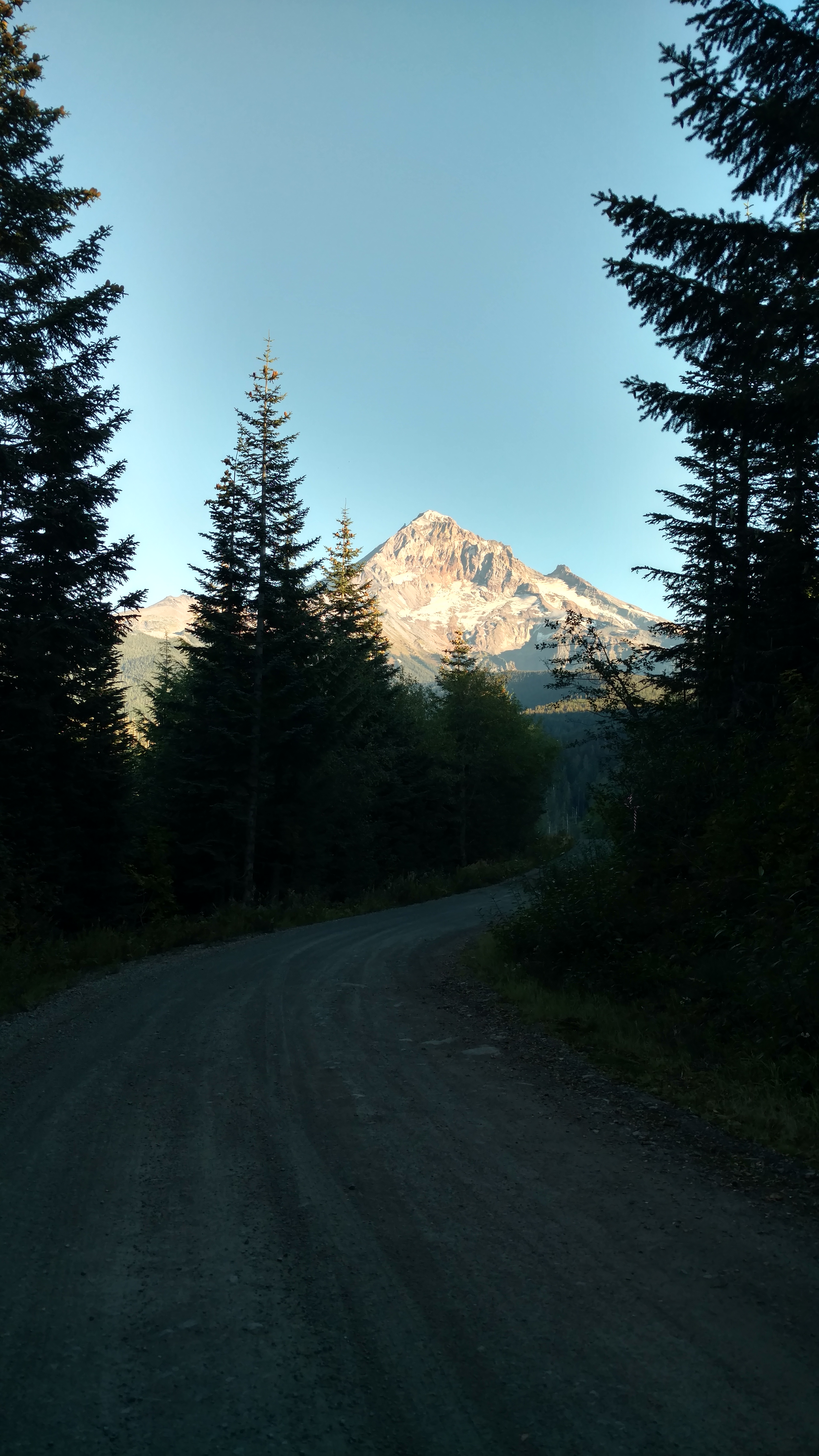 That night was the darkest I’d had in a while. The stars were bright enough to throw the surrounding trees into silhouette against the sky, and there was a constant mountain breeze ruffling the tree’s tops as I tried to lull myself to sleep. I felt utterly alone, which was scary, but not as scary as when another car would randomly drive by my resting place in the middle of the night. “What are you doing driving back here at this hour?” I thought to  myself.

I was greeted with a thick mist the next day, but I determinedly got myself up and onto the PCT, walking southwards towards a small peak I had read about on the internet. I was still recovering from a nasty cold that had moved into my lungs, and so, despite the PCT’s easy grade (a familiar feeling from my time on the overlapping JMT), I had to walk slowly as my respiratory system gurgled along.

I’m not sure why, but these were the days of being fearful. It seemed as though I was completely alone, but I was not comforted by that fact. The trees surrounding me felt more like a trap than a place of solitude, and I resorted to my usual singing in order to keep my demons (and any wild animals) at bay. Both my fear and my notions about being alone turned out to be foolish, however, as I soon discovered that there was a little spur trail that was very popular among local hikers, and was soon joined by many other voices in the woods.

I reached the top of Pike’s Peak just as a gentleman was finishing up his sunrise project to photograph Mt. Hood. The behemoth was shrouded in cloud by the time I reached the viewpoint, but, as I waited patiently, its peak was soon revealed.

I was not quite as nervous walking back to my car. Once I realized my foolishness in thinking I was alone, I leaned into my surroundings, allowed myself to become familiar with the woods, and let go of my nameless fears. As I finished my walk for the day, I felt, in fact, at ease and at home. What a gift the woods gave me.