It’s been over a year since I was in the desert. I’ve been asking myself to get back there ever since I left. Auspicious things seems to happen in the desert. Last time I was there, I experienced the extreme paradoxes that life has to offer: the feeling at once of being exactly where and when I want and should be, whole, and fulfilled; and loosing one of my oldest friends. Connection, and loss; happiness and grief at the same time. The desert landscapes surrounding Moab set the scene for these vivid and visceral experiences, and I have wanted to give myself more time in that space ever since.

The realities of capitalism and other life choices, however, prevented my return until Thanksgiving week of this past year. (Sometimes, there are just too many people and places and things to see and do. ) As I work with the University schedule, I was able to take the entire week off and go with Claire for a four day desert adventure. The plans were loose: climbing, walking, camping. That was all I (thought) I wanted. Claire was deeply busy with auditions for opera programs and companies, so I took it upon myself to pack all our supplies and food for the short trip. We collectively had a lot of food to eat, and I even made some homemade hummus for the six hour drive we had to do.

The first night, we arrived at one of the campsites on the Colorado River on highway U-128. It was dark, but we could tell there were some spectacular red walls to see around us. The moment we jumped out of the car, however, our enthusiasm dropped somewhat. Being the soft Front-Rangers that we are these days, the 32 humid degrees F by the river was a shock to the system. We busily set up our tent, my feet beginning to freeze in the process.

As we huddled in the tent that night, I felt the incompetency of my 25 degree rated bag. The cold seemed to be pressing in on me from all sides, and my feet really could not get warm. We had even brought a comforter quilt just in case we needed some extra warmth (we were car camping after all, no backpacking!) but it didn’t seem to be helping. Somewhere along the lines of my fifth hour of not really sleeping, I rubbed my feet together in an attempt get warm. Claire said, “Molly, are you sleeping?”

She sat up and lifted my feet up, pulling the bottom edge of the comforter under them before tucking me in at the sides again. It actually helped quite a bit, and I managed a couple hours more of sleep before waking up to a soaking wet tent bathed in desert sunlight. It was cold still. Really cold. I’m not sure why it felt so enormously cold, but it did. We still resolved to do some climbing that I had heard of just down the road, and we gingerly packed up our camp to make our way there, snacking on the leftover hummus as a post-breakfast snack.

We arrived at the sport climbing walls about ten minutes later, a crag called Take-Out Beach, appropriately named for the beach along the Colorado river to which it is juxtaposed. The crag is on the south side of the canyon, and so we were destined to be in the frigid shade rather than the warming sunlight to do the climbs, but we were still determined to try it out. There is very little sport climbing in the Moab area, it being more appropriate rock for traditional crack climbing. I am not yet a trad climber, and so am limited to the sport climbing walls, so I’ll take what I can get right now.

I started out leading two 5.7s, One Eyed Willy, and Adventures in Babysitting. Both were totally doable and totally scary. Everything is harder when you’re cold, and I was very cold. I couldn’t really feel my fingertips on the rock, and that made me wonder whether or not I actually had friction on them or not. Also, every kind of rock in a new type of climbing. This red sandstone conglomerate was a interesting combination of little shelves and pockets that needed to be navigated up to the top.

About an hour later we took a break to stand in the sunlight down the trail a bit. We were thinking about bailing and finding a sunny spot to climb when a couple and their dog appeared. We ended up chatting with them until another couple, friends of the first showed up as well. They both brought there adorable dogs with them, which is always a good icebreaker, and we chatted for a bit before deciding to climb together for a little while.

Thus, the young men in the group became a couple of rope guns, and we were able to pub up three climbs that I would have been much too afraid to lead: An Overflow of Good, To Boo, or Not to Boo, and Taming of the Boo. Claire and I climbed all of these on top rope, which was insanely awesome practice for more challenging outdoor climbing I was so grateful to have met up with our new friends in order to try out some seriously awesome climbing. 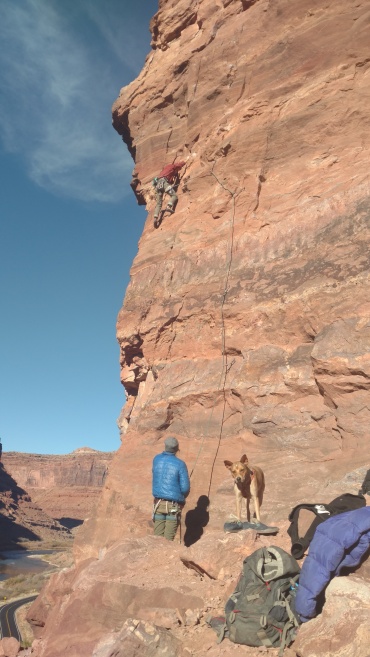 We departed from each other as the sun was going down, Claire and I headed into Moab to get some gas and supplies, as well as make a plan for the next day. We decided that it was just a little too cold to stay out that night, and made our way to the hostel that sits just a little ways outside of town and costs only $12 dollars a night. I am so glad we did.

After and insane time making dinner amidst twenty other people in a twenty foot square kitchen, socializing the the dirtbags and other boulderites, there, we headed to bed. I was feeling a bit off. Gassy, to be precise. And I wasn’t sure what was happening until I spent basically the rest of the night in the hostel bathroom. Somewhere along the line, we had gotten food poisoning.

And that was the theme for the next day. It was cloudy, it was cold, and we were pretty sick and miserable. Food poisoning is something you really just have to wait out and maintain hydration. We weren’t in a place to go on any adventures. We still dragged our bodies for some walks around Arches National Park, though. We went out to delicate arch, and landscape arch, holding back bodily functions along the way. By one in the afternoon, we threw in the towel and took refuge at a restaurant called 98 Center, where the served good strong coffee and insane Pho. There, we got drunk off good food and warmth while we finished our recovery. We were in there for at least three hours, and I really want to thank the proprietors for letting us be. Refuge was much needed.

We felt somewhat revived after our stay at 98 Center, and so decided to make the drive down through Indian Creek and into the Needles district of Canyonlands National Park, which I will talk about next time.

@blackforager I found my first Ohio Hickory nut! #metroparks #ohio #hickorynuts #nuttrees #wildforaging #honorableharvest #publiclandisnativeland #shawneeland
Ohio has magic. #ohio #hockinghillsstatepark #oldmanscave #waterlight #ripples #neature #beauty #sandstone #magic #hikingohio
Well so. I did indeed shave my head on my 28th birthday this past weekend. My head is lighter! Looking forward to all the new sensations this short short hair is going to bring. Thanks to all my amazing new friends for being there, supporting me with their enthusiasm and love along the way! Thanks to Troy Schleich, an undergrad architecture student at #theknowltonschoolofarchitecture for being a sport and taking these great photos of the process. Thanks to Sean Strothman, my climbing partner from #elpotrerochico 2018 for showing up and doing the deed for me! Please consider donating to One Tree Planted if you are inspired by my haircut. Link in bio!! Happy Equinox!!! #shavedhead #equinox #onetreeplanted #climateactionnow #blacklivesmatter #decolonizationisnotametaphor #luckyperson #knowltonschool #gradstudent #landscapearchitecture #ohiostateuniversity #thisplanetearth
I see you, Ohio. You may have recently mashed up the muscles in my left quad like potatoes, but there have been gifts as well. #ohio #durr #neature #babideer #bambi #fawn #debussy