I Went to the Jungle and Life Afterwards Was Different

Sometimes a place really welcomes you. You can feel the resonance, and even if things go wrong or you make mistakes, overall things will go well and you´ll enjoy yourself. Other times you meet a place and it just does not want you there. Or rather, your personalities just do not mix well. This is okay. This happens sometimes. If this happens, it´s usually a good idea to just move on. I did not move on, and my, my did I have quite the adventure.

Firstly, I accidentally locked myself into the garage of the house where I was staying, five minutes before my taxi came to pick me up and 5:00 in the morning so that I could catch the 6 am bus to Puerto Viejo from San José. I had to the bang on the door of the house and yell at the poor sleeping people inside so I could get the key to get out. I really panicked them, which was terrible. But I successfully got out. Great start.

Then the bus was delayed by an hour in the mountains outside San José because of construction, which isn´t that big a deal, but the bus ride is already 5 hours long, so tacking on an extra hour was a bit harsh. Luckily we got a break in Limón before finally being able to view the turquoise shores of the Carribean on the way to Puerto Viejo.

I came to Puerto Viejo to spend time on the Caribbean before a Permaculture Teacher Certification course at Punta Mona, a center for regenerative design and herbal studies. You have to either ride a boat or walk 8 km through a primitive jungle to get to Punta Mona, but we´ll get there.

I decided to stay at a place where I could camp in my tent in Puerto Viejo, being the thrifty backpacker that I am. I feel like leaving this place unnamed for now because I have pretty much nothing good to say about it…except that it was made of all mosaics which is pretty cool, and there was an awesome beach, but I can hardly give the hostel credit for that. I was there for three nights and I pretty much didn´t sleep for two of the three nights.

As I walked around during my first day, I heard rumor of a party that was going to be happening that night. I steeled myself for a loud night. I thought I was prepared, having spent almost an entire month training myself to fall asleep to music in my tent in a previous party town. I was not prepared for the party to include the overuse of reggaeton music, nor for it to continue until 6:45 in the morning.

At some point, I woke up and wondered if everyone was just passed out around the DJ booth and they had just forgotten to turn the music off, then I remembered that cocaine exists.

The next day I rented a banana, single speed bicycle and rode the 10 or so kilometers down to Manzanillo. On the way I stopped at a beach called Punta Uva, which was truly a Caribbean paradise. White sands, palms, turquoise clear water. The Caribbean has a lot more rocky reefs offshore and so when the swells are low, the water closer to shore doesn´t actually have any waves. It just gently undulates allowing for snorkeling and leisurely swimming. It was so, so lovely.

The Caribbean side of Costa Rica really is very different from the Pacific or San Jose. It´s extremely verdant and very flat. There are far more people from African descent there, and some of them speak Spanish, English and Creole English, which is an extremely interesting dialect to overhear.

My last night in Puerto Viejo brought on my first experience with tropical rainstorms. When it rains in the tropics, it doesn´t just drop rain, it drenches rain. Its as if the air suddenly become liquid and nothing has a chance of staying dry. Needless to say, my not-so-high-quality tent was flooded within the first 45 minutes of rainfall and I was forced into the shelter of the hammock room, where I spent the night shivering and trying to get the blood back into my feet from being lifted up by the hammock. 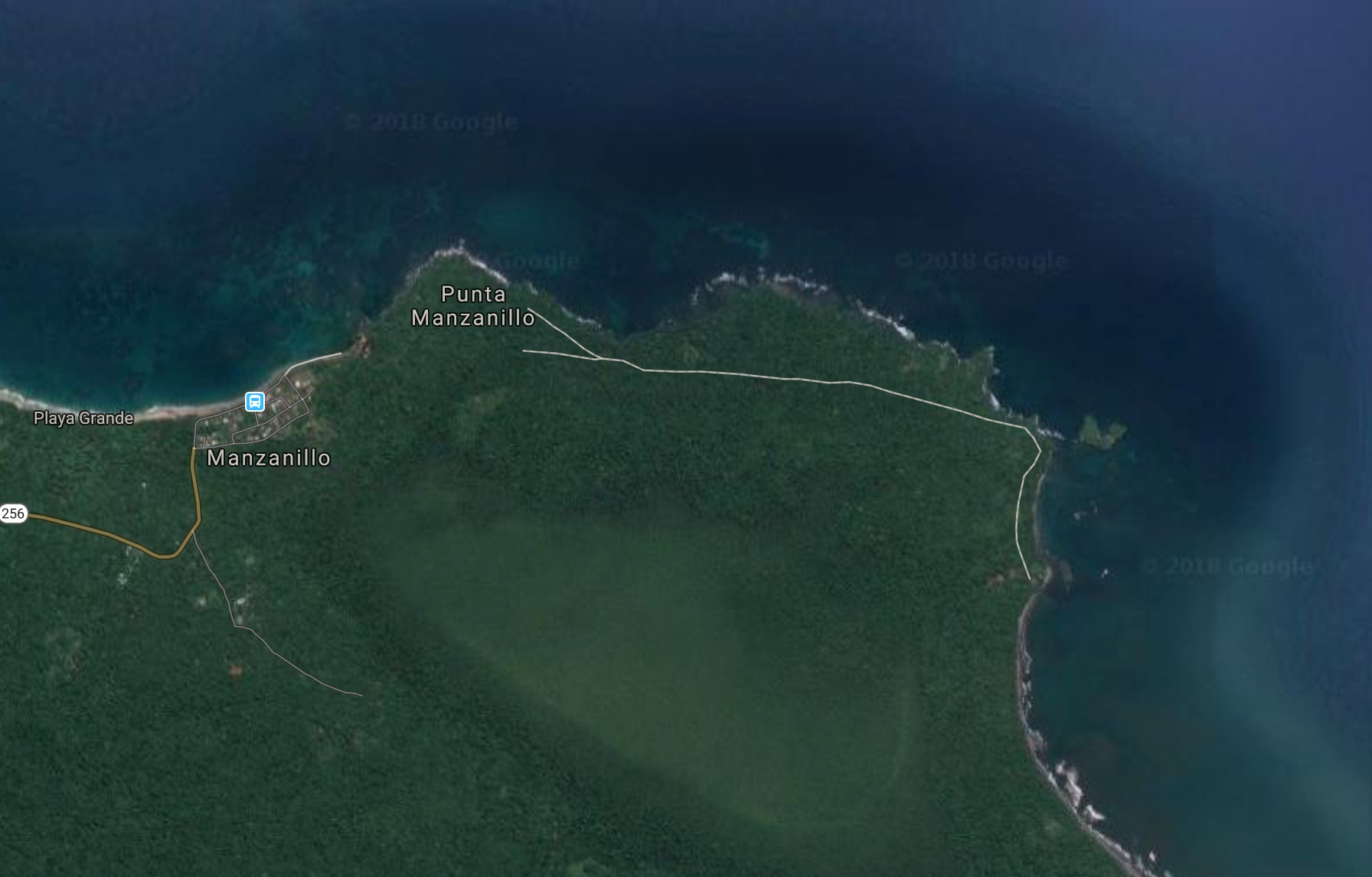 The next day I headed to Punta Mona. Remember how you have to take a boat there? The end of the white dotted line about is  Punta Mona. My boat was 2.5 hours late (Tico time, pura vida, etc). But that was fine because I ended up making friends with some Costa Rican men who wanted to give me free beer and carne asadas, so that was nice. Plus it´s not like I had a deadline. 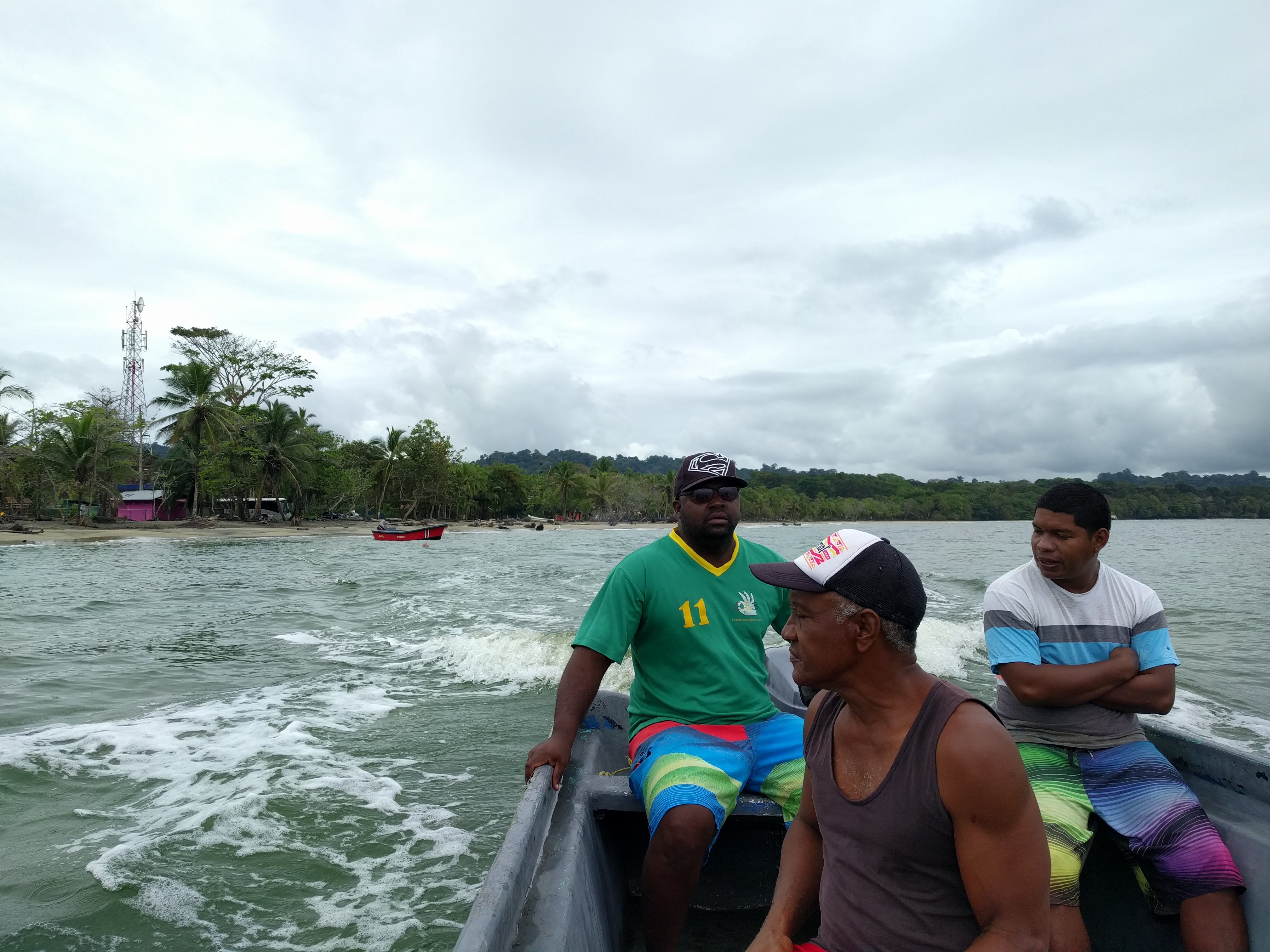 I´ll be brief about my time at Punta Mona. I got sick. I threw up. It rained. And rained. And rained. Mold grew on my clothing. I couldn´t eat. I learned a lot about Permaculture and made some amazing friends. My last day, the sun came out, I dried everything in it, repacked, and took the boat back to Manzanillo.

Once in Manzanillo, My feet were free of sand for the first time in a week and it felt amazing. I also ate my first meal in days, and it was a holy experience. I had so much energy from the meal that I even got up and played a little hand clapping game with some of the kids hanging out in the street.

Needless to say, I didn´t have the best time in the jungle, though there were moments of brilliance. I just think that the jungle and I work better as distant acquaintances. Now I know.

For my last week in Costa Rica, I headed back to the Pacific side to get a little more sunlight and a little less rain.

All photos by Dietrick McGaffey