Everything at EPC changed once I met Ryan, and through Ryan, Sean. Ryan and Sean were roommates from Ohio who were meeting a crew of friends down at EPC for a week of climbing multi-pitch. Ryan and I hit up a multi-pitch called TNT, a five pitch 10a. I ended up leading the 10a pitch, which was more of scary, long traverse on slightly sketchy rock and lots of cactuses. I got through it, though, and we had a good time getting to the top.

Our skills were tested, however, once we had rappelled down the top two pitches and found that our rope was resolutely stuck through the loops at the top. The problem was that there was just too many cactuses and rocks in the way of the rope being pulled. It wasn’t vertical enough. So, Ryan manfully ascended the line. I was suddenly extremely grateful for the two hour safety clinic I had taken in Squamish  a couple of years ago when I learned how to ascend a line. The problem was that my understanding had never been tested until that moment. Long story short, we successfully got the rope down as well as ourselves after burning up on the ledge for about an hour. Not ideal, but everyone arrived home safe.

That night, I met Ryan’s roommate, Sean. Sean had an injured ankle and so was not climbing for some time, but making the best of being in Mexico. We hit it off pretty quickly, both having grown up in New England. The rest of the guys’ crew from Ohio arrived the next day, and we went out for a couple of chill single pitch warm-ups; Sean, Marion, Abby and I. Everything was going splendidly. I was in the position of being the most able bodied lead climbing (thanks to Sean’s hurt ankle) and had the opportunity to be the rope-gun, thereby assuring that I would have to climb scarier stuff.

The initial plan to have a single pitch practice day turned into a multi-pitch haul. I woke up late the next day and ran up the canyon to find Ryan, Marion, and Sean at the base of a six-pitch climb called Dope Ninja. It is more efficient to climb multi-pitch with two people instead of three, so I was invited to be Sean’s lead climber as he did not want to take the risk of a lead fall on his ankle. The climb is rated 10b, which I had never lead before in my life. But, I could tell I was ready.

The two 10b pitches of the climb are right after each other. Sean and I waited for Marion to make her way up the first 10b, which was hard for me because I was nervous and itching to go. I got stymied on a steep section and took a small fall, but all was well. Sean cruised the follow, and then Ryan and Marion let us go ahead of them. Having all three of them to cheer me on as I tackled the tricky crux of the next pitch was absolutely amazing and so helpful to sending the climb. Even going fairly quickly, Sean and I did not reach the ground until dark. You have to rappel the opposite side of the fin on this climb, adding and extra pitch to your descent, but we made it just fine. 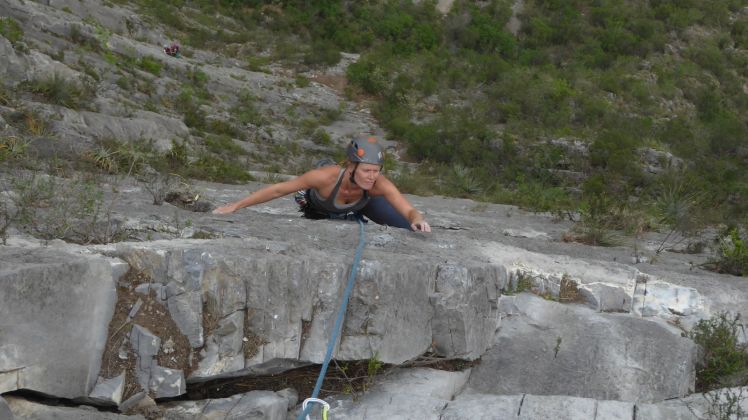 Having discovered that we were excellent climbing partners, Sean and I decided that we wanted to take on one more multi-pitch together. I had followed a climb called Off the Couch with a really strong climber the week before and had followed it clean despite it being a really tricky 10d. Right next door to Off the Couch is a climb called Satori, a seven pitch 10c.  This was my chance to push my leading grade a bit further. I had finally found a climber partner with the right chemistry, and I had a climb I wanted to do.

We set off slowly to take care of Sean’s still delicate ankle. The approach to Satori is about half and hour if you’re in good condition and features a few tricky cairn-following maneuvers that if you fail at will have you scrambling up some shitty talus. You can avoid a majority of the talus pretty easily if you take your time and lookout for the cairns. We made it up in the beating sun after about an hour, Sean’s ankle still feeling okay, which was the higher priority. We wanted to get out and climb again, but not at the detriment to Sean’s ankle recovery. Ironically enough, he found it easier to climb that walk, so as long as we got to the climb and back safely, everything should be okay.

I connected the first two pitches of the climb that lead to a large pee ledge from which the two routes (Off the Couch and Satori) diverge. There is a traverse-y 5.9 after the ledge which leaves you on a crappy hanging belay, but I was feeling too exposed and nervous to link the next two pitches. I wanted my climbing buddy closer to me, what can I say. The next 10a was scary. The next 10b was scary. The second to last pitch was the 10c. I got plenty of beta under my belt, and had Sean take twice so I could scope the scene before I made my moves. It was a legitimately difficult climb, but there are rumors that it is graded soft. I did not fall, but I did not “send,” as they say.

To be honest, I don’t really care, because what is more important is that I seem to have finally left behind my mental block of climbing 5.10. Thank goodness. I can’t thank my amazing climbing partner enough for his support.  Some climber may be able to send with whomever is available to give them a catch, but for me, it’s all about the people. Cheers to the wonderful folks of Hidalgo, Rancho El Sendero, Emma, Wade, Eric, Andrew, and the Colombus Crew for a great final climb at EPC. 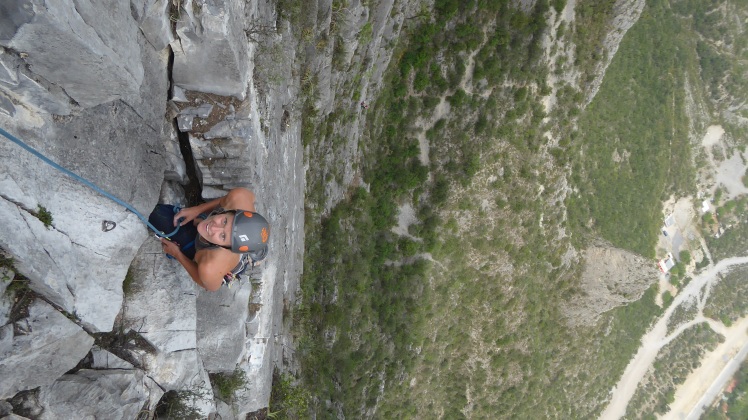