A Reflection on Surviving My First Multi-Pitch

It’s officiallly the month of my birth, and I was awakened this morning by Google photos sending me an email reminding me to “check out these photos you’ve missed!” I’ve never understood that particular phrasing because I’ve definitely taken all the pictures that are on my photos drive. I mostly am annoyed by these emails, but today, I checked them out.

It turns out that two years ago on this very day I climbed my first ever multi-pitch route. It was a part of my “25 for 25” climbing goal and it was a 5.7 in Banff National Park, Alberta, Canada.

It was probably only the second or third full day of that road trip, and my first time wandering up to a crag and seeing who would belay me. I was terrified. I had purchased a guidebook about climbing in Canada at the Canmore adventure center and found out about a place called “Grassi Lake” underneath Ha Ling (previously named “Chinaman”) peak. I got out of my car with my brand new rope and gear, and wandered down this rocky pathway under the lake until I found some folks putting up some routes. There were three of them, and from eavesdropping a bit I could tell they were from Australia. 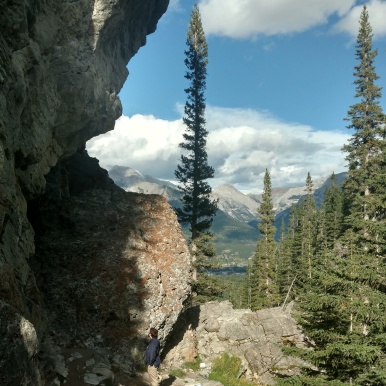 I started chatting with one of them, who seemed a little weirded out that I was just standing there. Again, I was terrified at this social situation that was rife with potential rejection, but Michelle warmed to me after a few minutes of conversation.

I explained that I was a relatively new outdoor climber just hoping to find some folks to climb with here and there, and if they were willing to climb with me I had all the gear, etc. I ended up top roping a few of their climbs that Simon (aka Crispy) and Mel had put up, and we ended up enjoying each other’s company.

That evening, they invited me to eat dinner with them and they discussed what they wanted to do for climbing the next day. Michelle and Simon were excited to get on some multi-pitch routes but it was going to be difficult with three people. Knowing that we had enough gear, they invited me to be part of the crew. I could go up with Michelle and they could follow so we’d all get to climb but it wouldn’t be so hard to manage the systems. I immediately agreed because that whole “multi-pitch” thing sounded cool and I was so excited at finding a nice group of people that I was not going to let them go for the whole world. 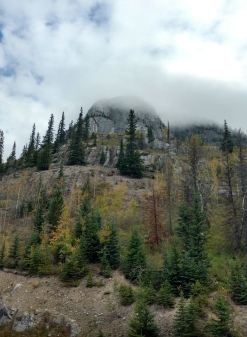 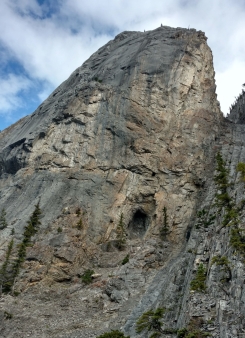 We went out to Banff the next day, found the climb from beta on Mountain Project, and immediately had to stand in line behind a group of three ladies who were all learning to multi-pitch climb. This was no surprise as the climb was a 6 pitch 5.7 called “Aftonroe” on a buttress called “Guide Rock.” As the name may indicate, it’s where guides take their clients to climb, so it can’t be too hard for new climbers. Moderate grade multi-pitch sport climbs are hard to come by, I now know.

The wait gave us the opportunity to go over multi-pitch systems, of which I new literally nothing. Michelle leaned into the craziness of that very well, simply bringing me through the way in which she wanted me to build the anchor, how to set up my ATC, being vigilant about hooking into the rock with my personal anchor, etc.

The insanity of learning all this key safety stuff on the fly is really hitting me in retrospect. I would never go up rock with someone who has literally never set up an anchor belay system before, even on a 5.7- which is not that hard a grade.

Clearly I did not kill Michelle, though. I even set up systems correctly, but…heavens.

As it were, I did my first ever lead on a multi-pitch that day. We ended up waiting around a lot for the three ladies ahead of us, and then decided to bail because a huge storm seemed to be coming right for us. That was a very good decision, actually, because then Michelle had to teach me how to repel on a multi-pitch. We ended up simul-rappelling, which I have not done since, but was interesting and fun. 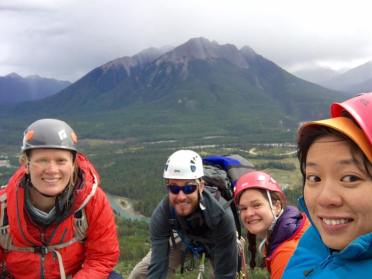 It was cool to see those photos from two years ago this morning. It reminded me how grateful I am to have survived this long as a beginning climber, for the people who have taught me along the way, and the journeys that climbing as brought to me in these two years. Cheers again, Michelle, Mel and Crispy!

P.S. I will not be doing a “27 for 27” challenge, unfortunately, because I have somehow managed to hurt myself in the neck and shoulder and am in recovery. No, it was not a climbing injury- oh the irony. Also, thank goodness for the Canadian Rockies.