So, Martina is here from Spain and we are going to explore the American West…just as winter appears to be setting in. It’s October, so it’s really a bit early for winter if you ask me, but the Rocky Mountains really don’t care.

Boulder was cold and cloudy when she first arrived, which was so bratty of Boulder. The few times it’s cloudy all year and it chooses the few days my Catalunyan friend is in town. Luckily it was sunny in the mountains, so we were able to have an awesome climbing day in Rocky Mountain National Park. 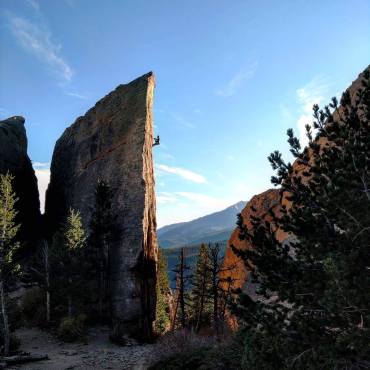 Our first destination after Boulder was Lander, Wyoming, the home to the National Outdoor Leadership School, and a gateway to the Wind River Range. I have been wanting to return to the Wind’s since 2017 when we attempted a through hike of the alpine route, but as usual with the mountains, it proved to be a challenge to actually get into them.

Instead we explored Sink’s canyon and squeezed in a little climbing between the rain showers that were floating in and out of the canyon.

We are now in Teton National Park, a place I last saw 18 years ago. It’s pretty strange to see a place that you remember so clearly from age 9 to now at age 27. Some really visceral memories came flooding back at the edge of Jenny Lake. When my family was there in 2001 the lake was lower and there was a long shoreline of rocks. I remember following my dad out toward the edge of the water, looking up at the Grand, unable to really understand where I was, just trying to not trip on the rocks of the dry lake bottom. Things look different than in my memories, and yet the same.

The weather is turning very cold here so we’re going to explore Yellowstone and then take refuge in Bozeman for a couple of days before heading to the desert where, hopefully, the weather is a bit warmer.