Guest post time! Written by one of my JMT partners, life companion, and sister, Claire McCahan:

“Two years ago, my sister and I looked up at Half Dome in Yosemite National Park with awe and wonder.  We were driving down the coasts of Oregon and California together for a span and decided to visit Yosemite as the finale to the trip before she headed back to the East coast and I continued down to southern California.

“I want to be on top of that.” I said, gazing at the massive beast of rock dominating the skyline. 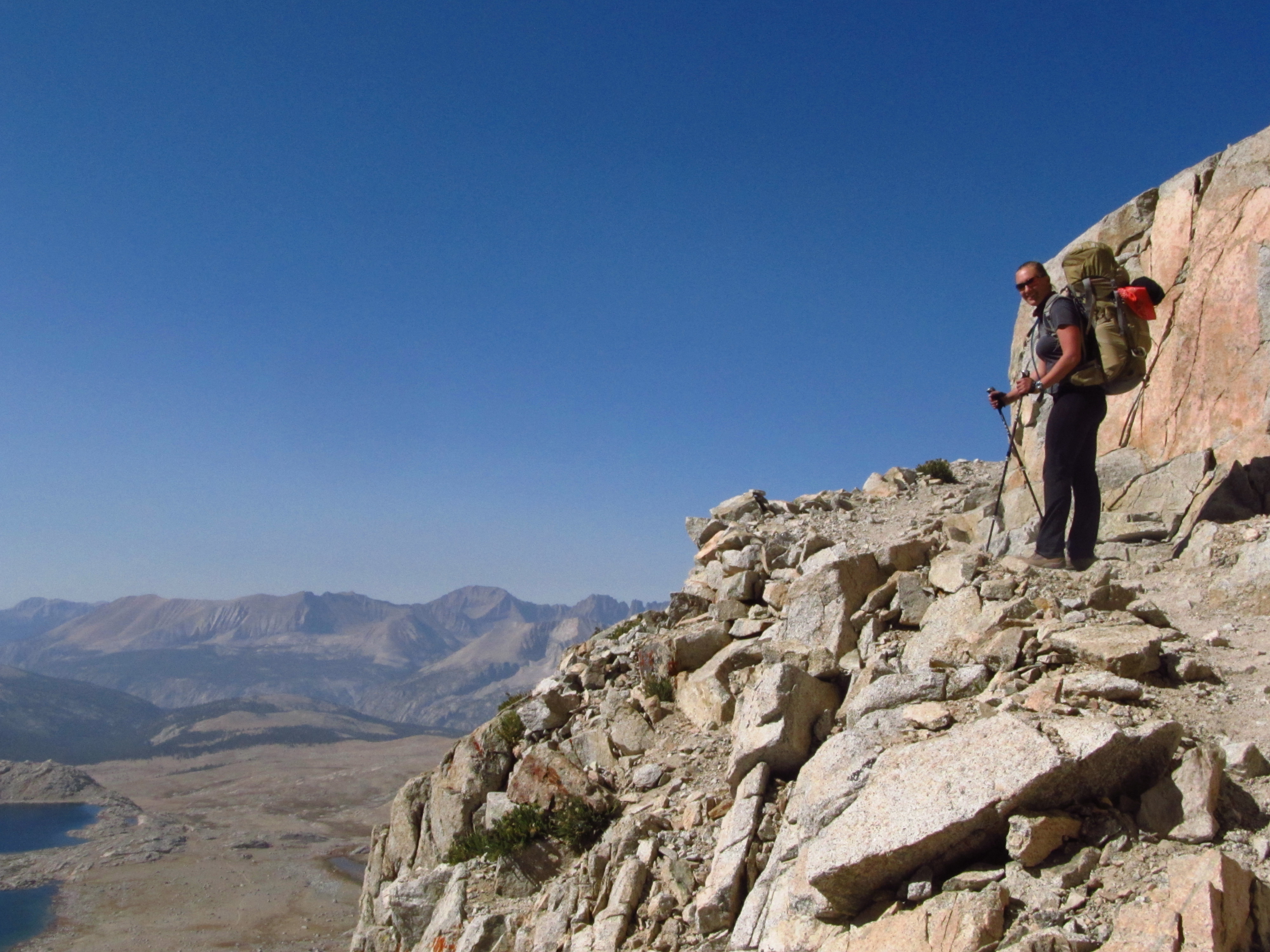 “Did you see the signs for the trail?” asked Molly.  “There were a bunch of trail names on the sign, but one of them said the John Muir Trail. I think that’s the one that goes through the whole park.”

Later, looking at the map, we saw that the John Muir Trail not only passes through a large portion of Yosemite, but continues on down the High Sierra all the way to the summit of Mt. Whitney.  The prospect of such a venture amazed both of us.  We were dismayed by the chaos of Yosemite Valley; the crowds, the trash, the huge hotels advertising wilderness just a few paved paths away.  We had both desired a deeper, more remote experience of the park, which the valley can’t give anyone.  We made a pact then, that someday we would come back and hike the John Muir Trail, and truly see what the Sierra had to offer and what this John Muir guy was so passionate about. 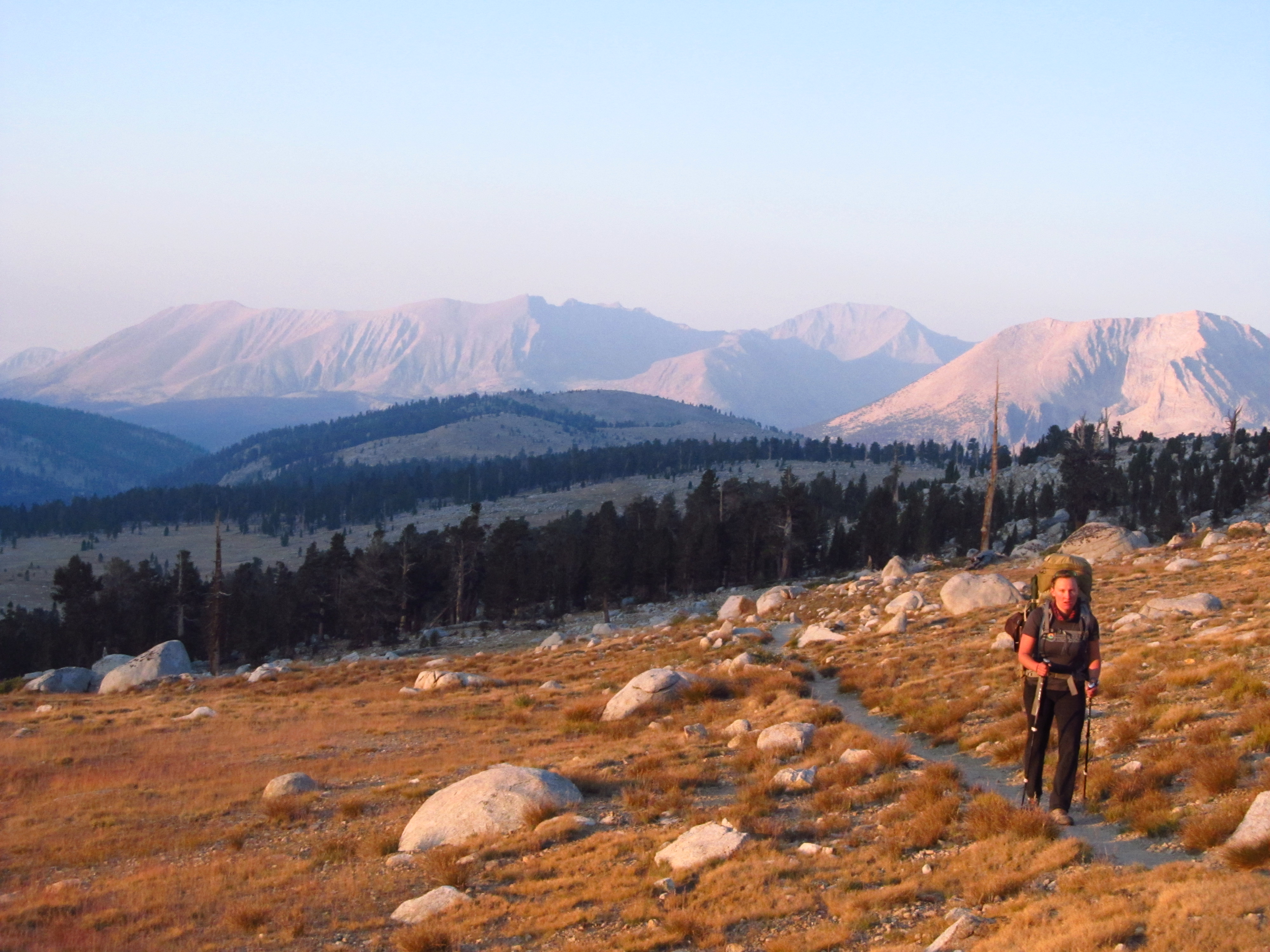 None of us really can remember who brought it up again, but at some point a year or so later I mentioned doing the trail for real.  A plan formed, which by then included our cousin who would be graduating high school in the Spring. A few months later, I was setting up timelines for permit applications and writing up gear lists.  I don’t think our families thought we were serious about it at first, but that summer we planned our food drops, bought plane tickets, and went wandering the wilds of Montana to train for the JMT. 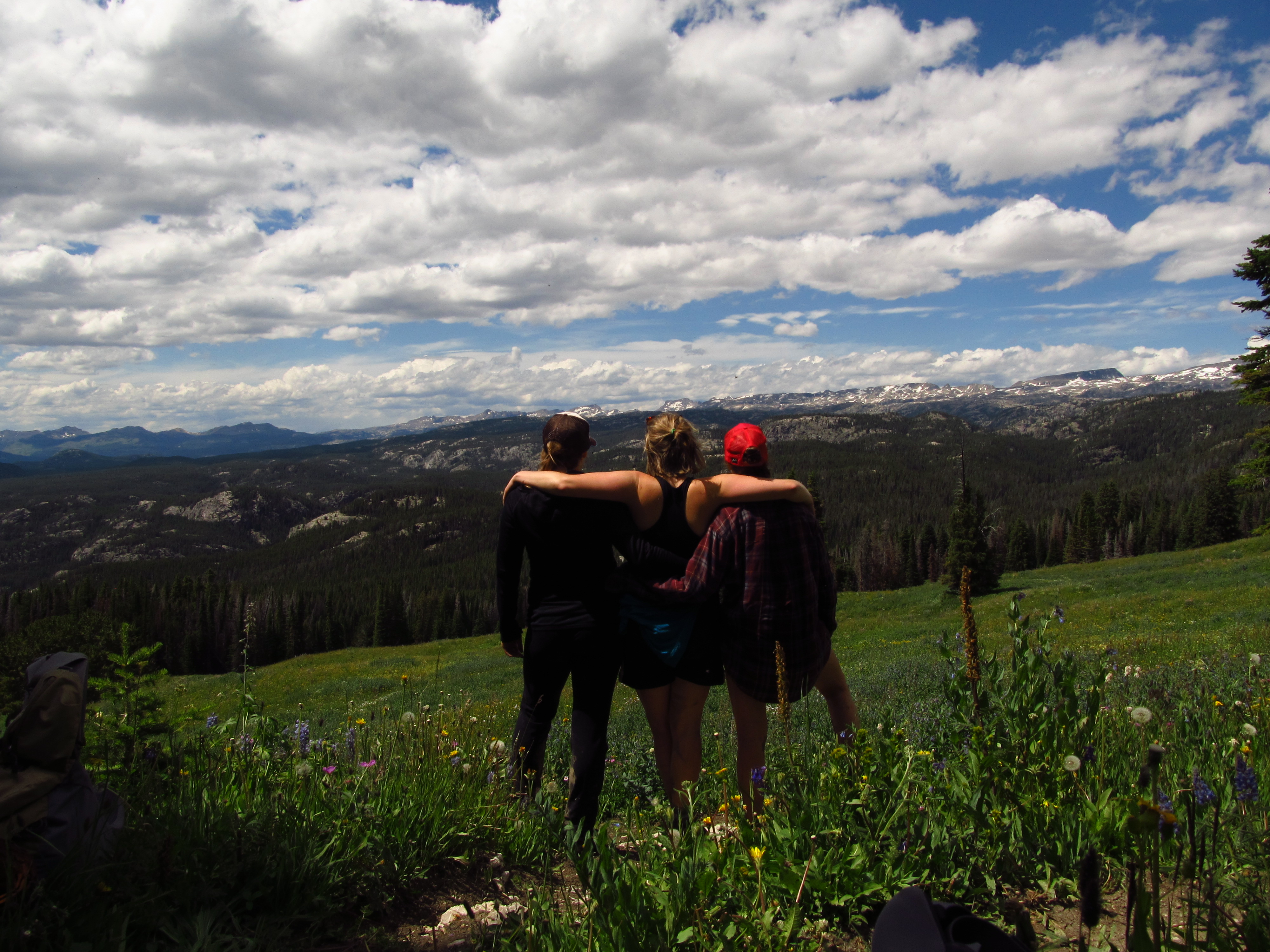 We planned to hike 260 miles in approximately 26 days, beginning just south of Mt. Whitney and hiking north to Yosemite.  We would be doing the trail in reverse due to permit restrictions, which would put us at the highest elevations on the trail right from the start.

We began hiking at 6:00am on August 27, 2015.  Our packs were heavy, too heavy we quickly realized.  That first day was torture.  It was scorching hot with little shade, and the trail was as sandy as an ocean shore, making our calves ache from sinking into it.  I don’t think we spoke very much that day, we lost the energy.  We simply focused on walking the 12 miles through the woods to our first camp site, hoping the day would pass quickly.  All of the excitement we had harnessed for the start of our adventure quickly turned into embarrassed misery.  This was not as fun as we’d imagined.

We reached the base of Mt. Whitney on our second day and decided to attempt it on the next.  Even with our elevation training, my sister and I were struck with acute nausea from altitude sickness, making it difficult to eat and giving us almost debilitating headaches.  I have a background of wilderness first aid training, so I knew the signs were not serious, but that didn’t make it any less horrible. 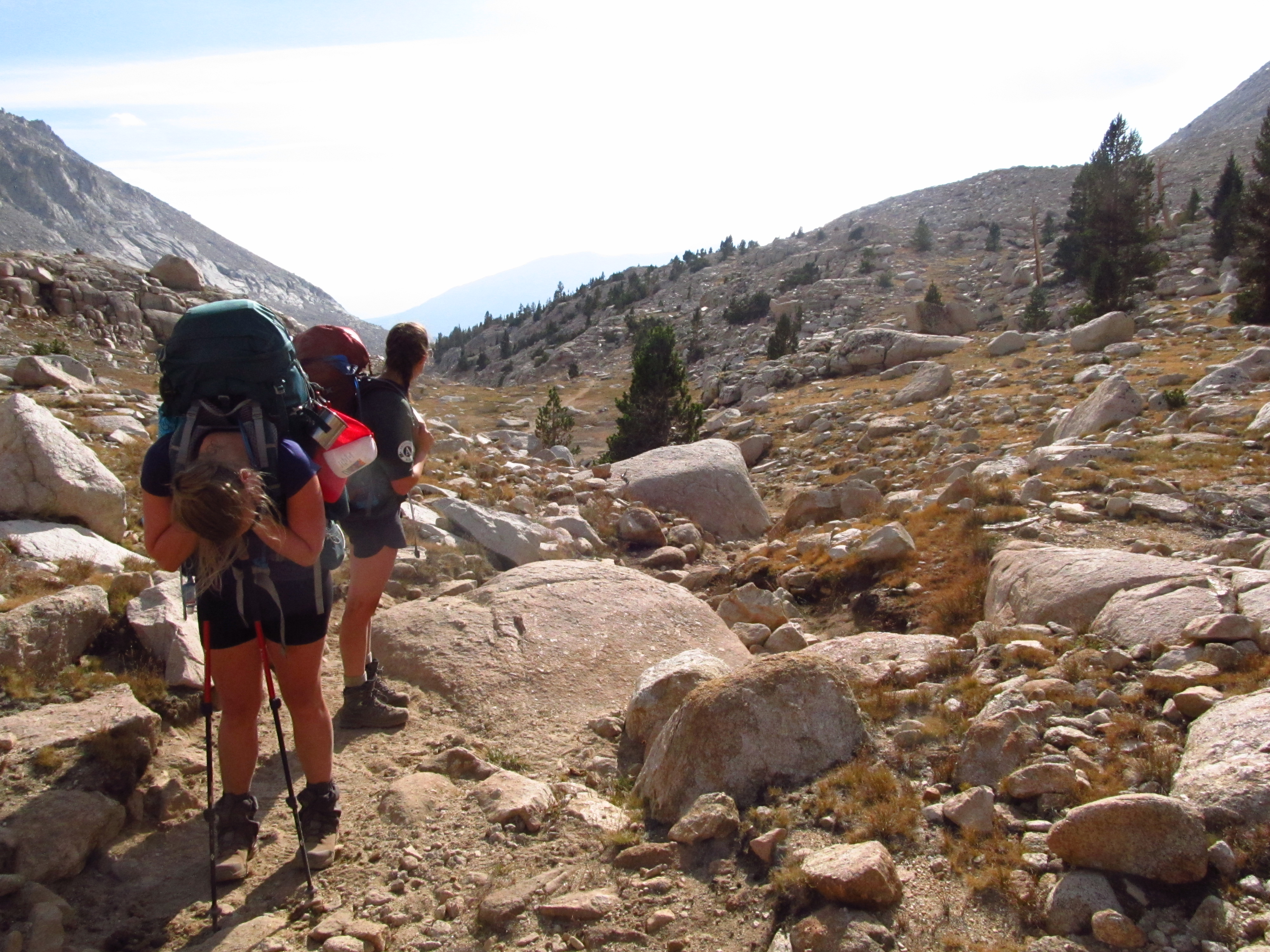 At 4:00am, under a clear sky and a full moon, we left our tent and began the steep accent up Mt. Whitney, the tallest mountain in the continental U.S.  The air felt thin, like I couldn’t quite get to it, and I had to keep stopping to let my heart rate slow down and catch a breath.  It was so cold, and the wind was fierce, whistling through the rocks and reminding us that humans weren’t meant to be there.  Even without the heavy packs, our pace was slow, plodding.  The sun was rising, leaving the sky brilliant pink and purple, and the yellow moon, which was bigger that I have ever seen, said farewell behind the distant peaks. 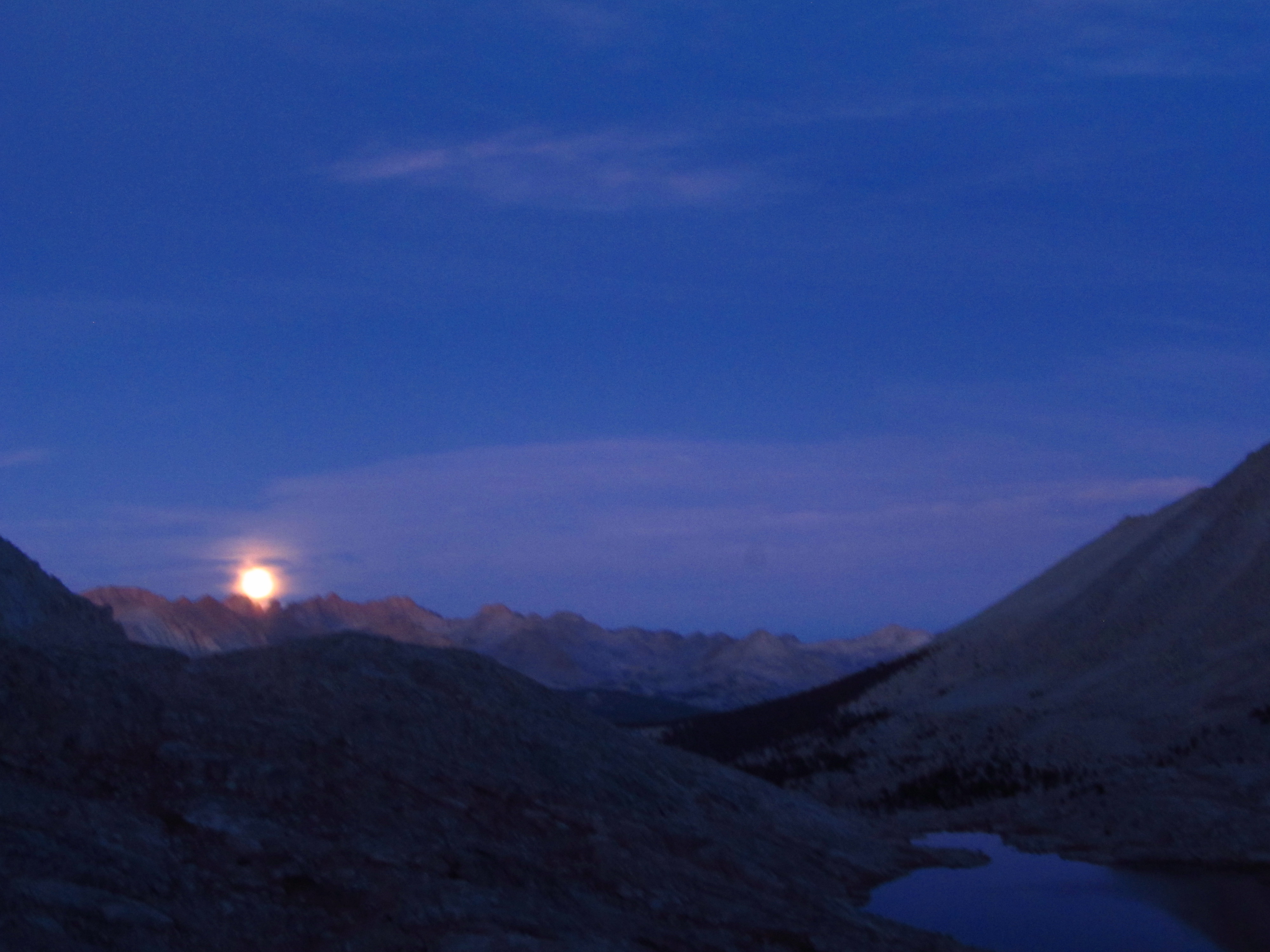 That day was both wonderful and terrible.  When we finally reached the summit, Molly cried, so overjoyed to finally stop, and so nauseous she thought she was going to vomit. 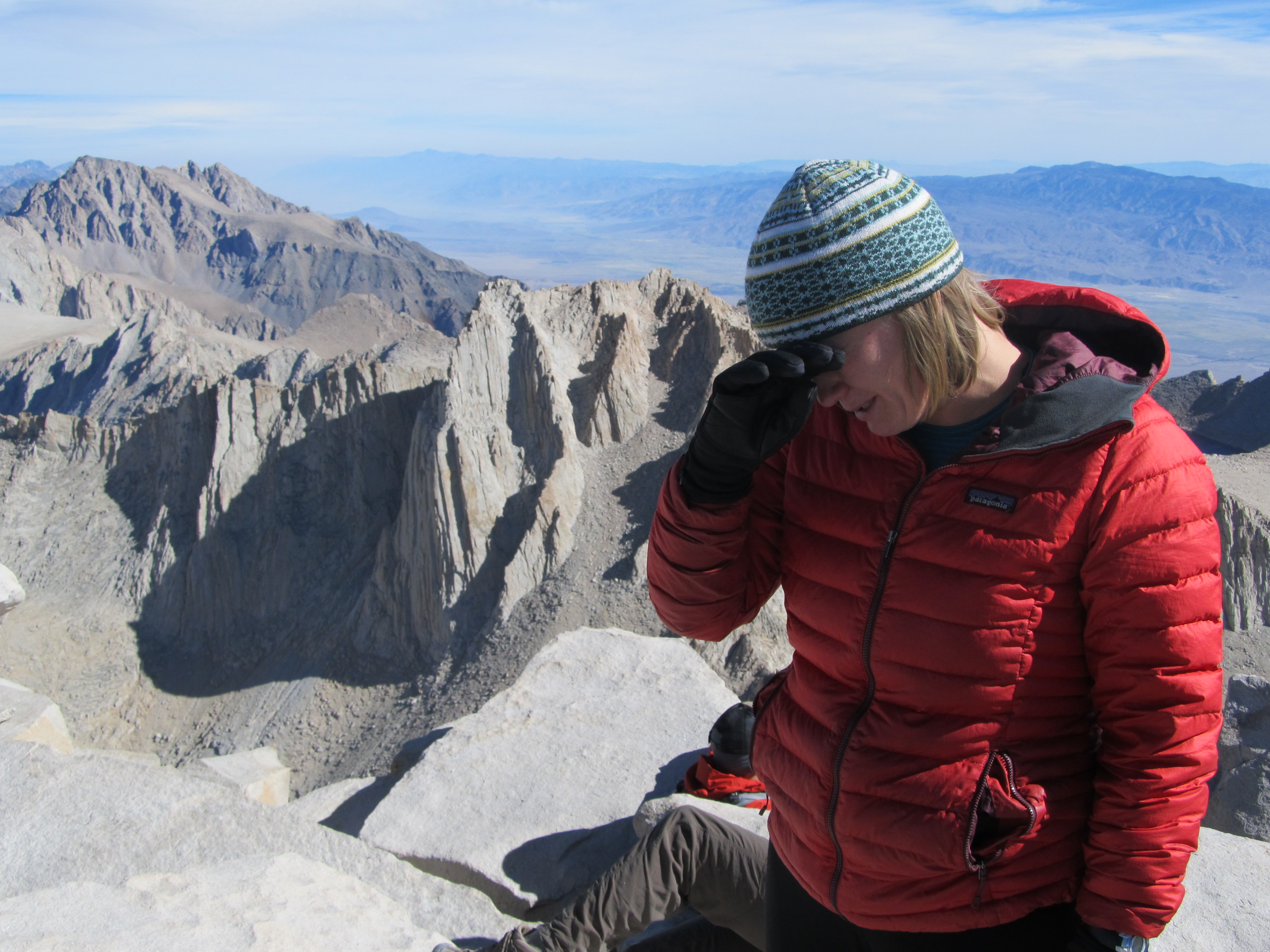 I looked out over the Owens Valley and to the north at the jagged peaks of the Sierra where our trail was to lead us, and to the volcanic plume of forest fire smoke that was to greet us.  I inhaled slowly, feeling the sun finally warming my face, and felt relieved. 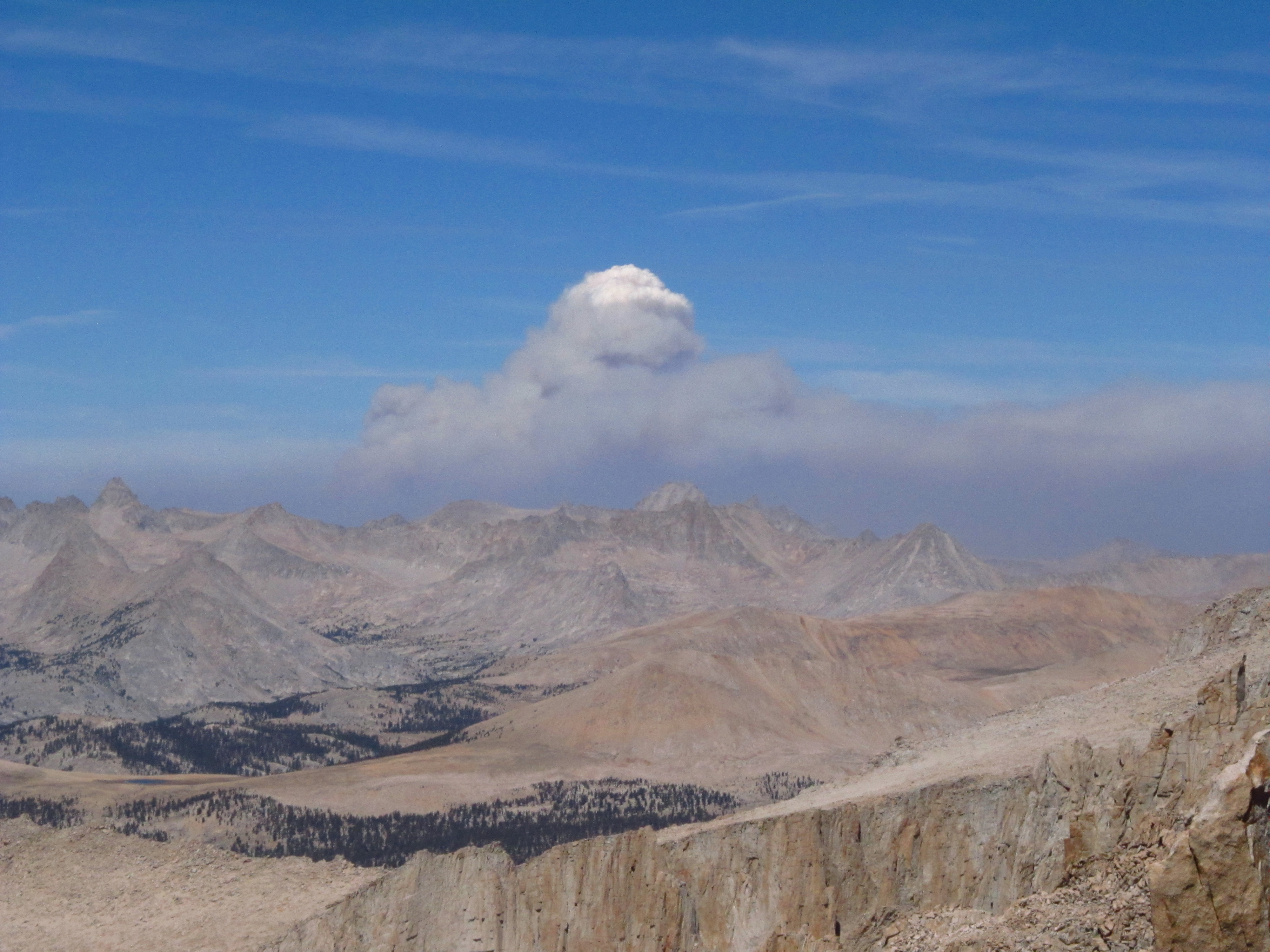 We didn’t stay long at the summit.  We were cold and it was getting crowded.  More people than I could have imaged were taking on the peak.  We eventually got back to camp and immediately crumpled onto our sleeping pads to nap.  Afterwards, we cooked dinner, packed up camp, and pushed ourselves another 3 miles down the trail to lower elevation where our headaches might cease.  We were all exhausted, but we made it before dark and settled into a well deserved sleep. 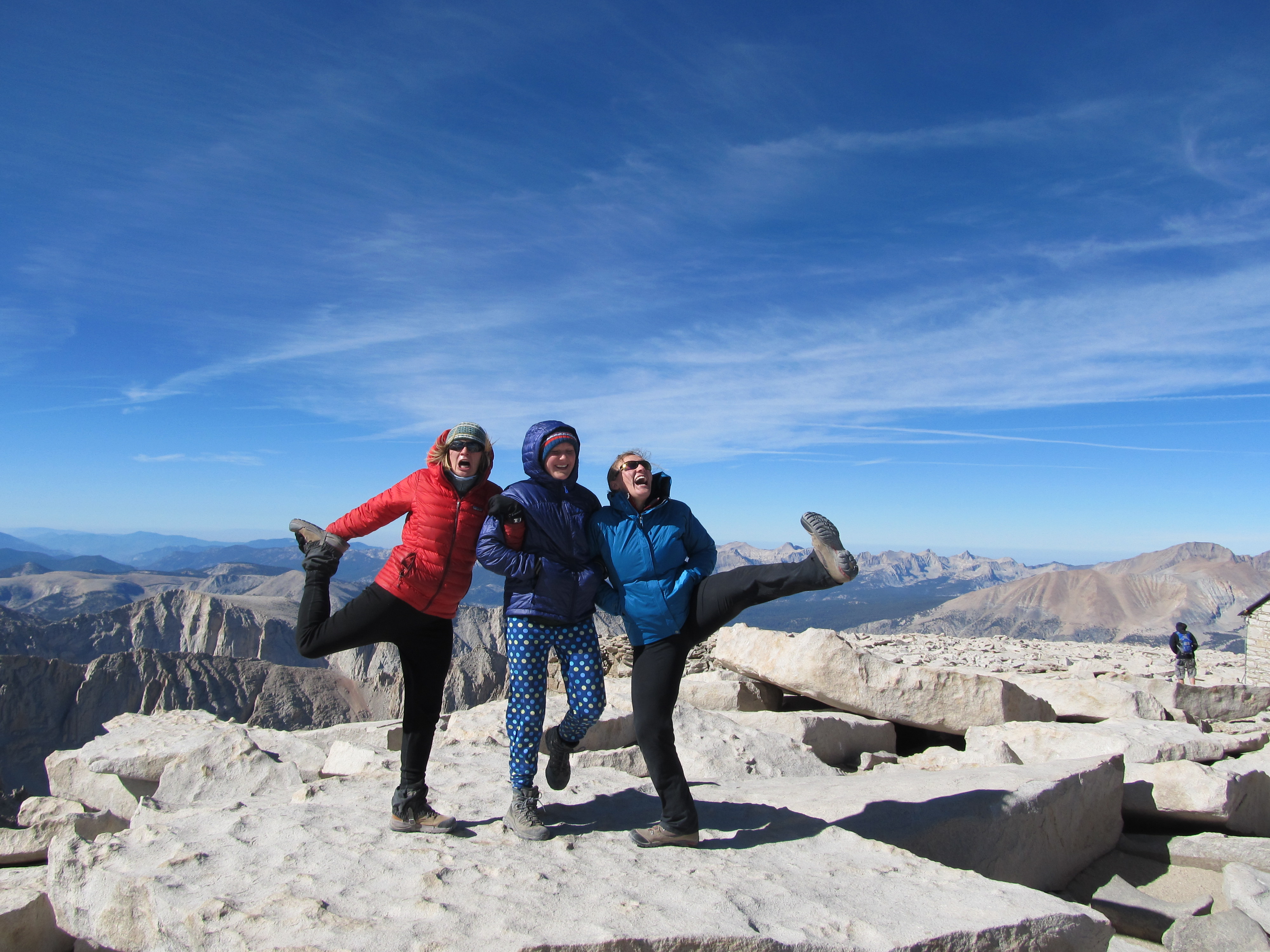 It was the first of many trials and challenges we would face, but I remember that evening very distinctly.  Three days had already seemed like a lifetime, and through pain and difficulty, we were all OK. 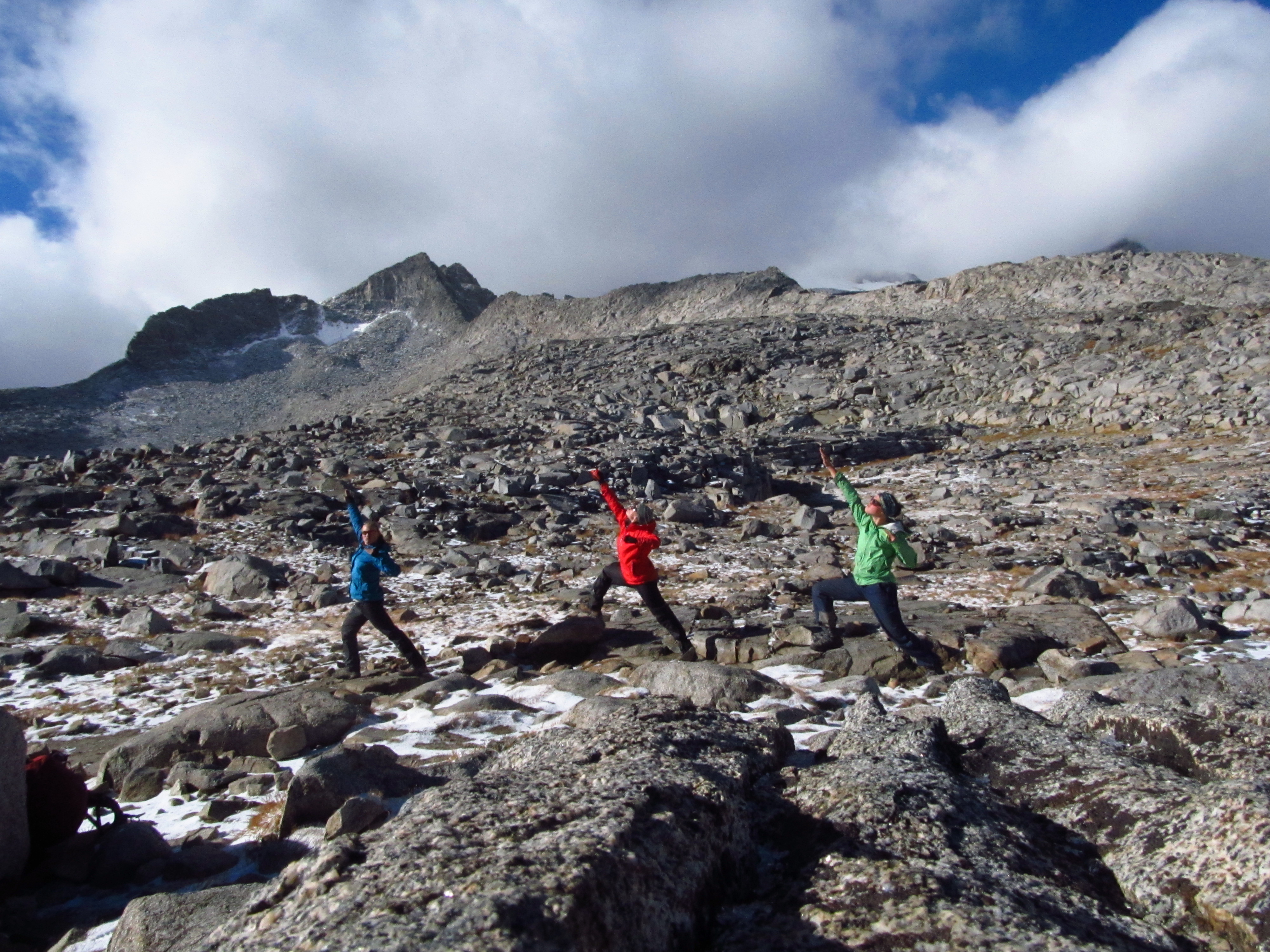 “We’re going to be OK” I thought, looking at the fading light around us.  We would get through this, we would face this journey together, and we would succeed.  Through smoke and heat, freezing cold and seemingly endless miles, we journeyed.  All of us growing stronger, more sure, and more confident with each day.  I gained insight into my being, clarity of my soul, and strength from the wilderness, which is immeasurable in value.  It was not only an accomplishment to finish the trail, but to finish it more bonded; supporting one another and sharing the experience. ” 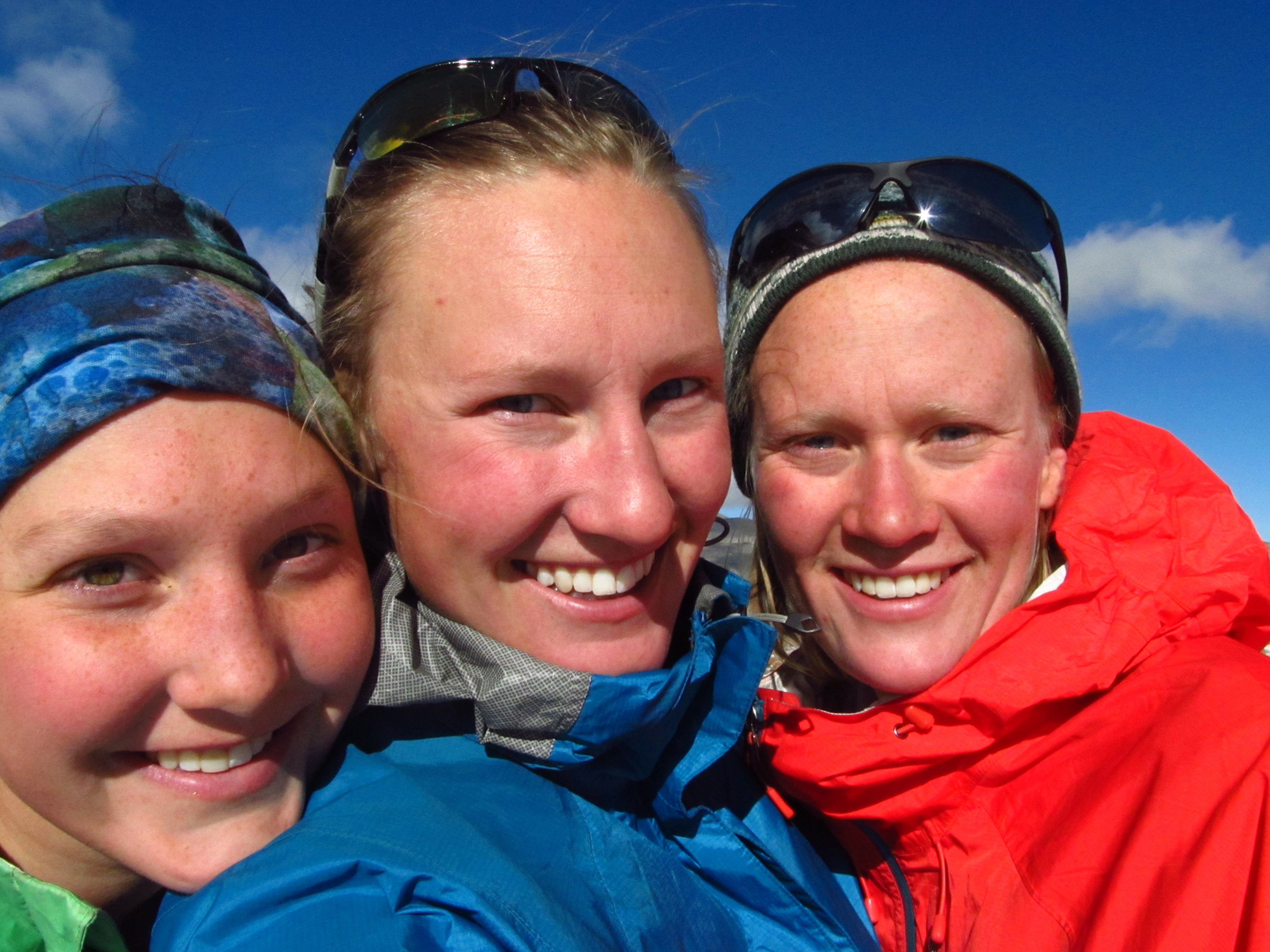