Wow, wow. Almost a month ago, Helen and I ventured up the Tripyramids. When Hazel in The Fault in our Stars ” …[falls] in love the way you fall asleep: slowly at first, then all at once,” she is also describing the way that Spring descends upon the Northeast. (Thanks, John Green, for such quotable quotes.)

You may remember my attempt at ascending the Tripyramid group in April that failed due to my lack of foresight around dogs and extreme grade. This time, instead of a dog, I brought along a Helen and we ascended not the extreme rock slide path, but rather the back side of the mountain on the Pine Brook Trail.

Helen and I took the red path from Route 112 (aka the Kancamagus highway). The trail head is a nondescript entry point on the side of the highway, a little-used portal that does not warrant its own parking area, so we parked on the side of the road and entered from there.

The first mile or so was very mild, the tender blooms and sprouts of spring still coming out in their light green coats. It was a bit misty, and I knew some rain was due to come our way, but nothing that concerning.  So Helen and I made our way happily through the woods, chatting in the deeply philosophical way to which hikes lend themselves.

The trail took a sharp turn upwards as we ascended to the saddle that then turns to the north peak of the cluster.  This rocky part of the trail was more technical to navigate. When we reached the saddle, we could see over into Waterville Valley and I was able to gain some perspective on the trail that I had previously attempted.

The rock slide cuts into the side of the mountain like a clean scar healed over many years. From a distance, the rock exposed on the scar looks like a vertical face that shoots straight up the mountain to the peak. No wonder I had so much damn trouble getting up the thing- that trail is crazy!

In comparison, the final ascent on the Pine Brook trail was steep and made difficult from patches of ice still left from the winter, but was overall manageable. There was really no view to speak of at the North peak, so we continued on the the Middle peak. The short distance between the two offered up cave-like alpine forest that created the illusion of shelter way up high. We even passed a flat area clearly used many times as a camp spot- probably on the more mild days of the year. It felt like a fairy land up there.

Middle peak did offer up some views both to the west and the east, although the rain was coming in fast from the east and obscured our view very quickly. Still, Mt. Chocorua and the while mountains of Maine were visible to the west. 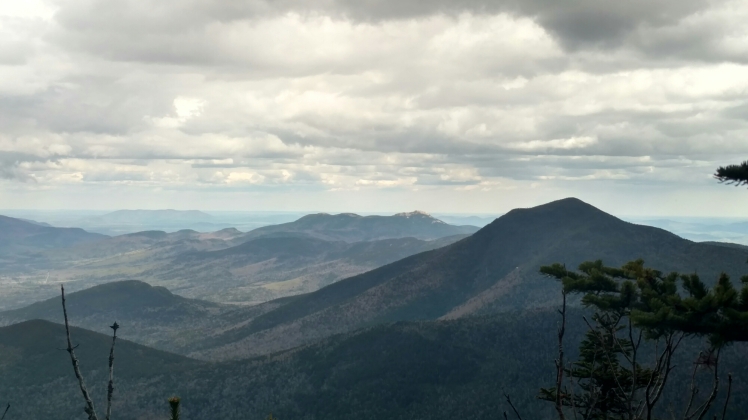 The rain came in quickly, so we decided to turn around and forego the south peak. We still had a solid 5.5 miles to go back, and an 11 mile day was respectable for both of us. We descended the icy trail made even slicker by the layer of rain falling on it slowly but without issues. The rain had abated by the time we were down from the mountain. As we made our way back along the brook, the wind picked up again. I looked the east and could see the rain coming in. I stopped and said to Helen, “Oh, looks like the rain’s coming in again. I’m just gonna get my jacket on again real quic-,” when a flash of lightening whited-out the world for a half-second.

We both froze. I immediately started counting in my head, “One…two…three…four…five,” when the thunder came as a crash, not from the outside world, but rather as an explosion that seemed to emanate straight out of my own flesh. Panic gathered around us as a palpable cloud, but I forced myself to calmly put my jacket on, realizing that the game had changed very quickly. I turned to Helen and asked, “Would you like to run a bit?” She answered with a resounding yes, and so we turned and booked it down the trail.

The rain hit then with huge, warm drops. After a while with no more lightening, my nervousness subsided. I felt good running (for once in my life) and the pounding rain washed my face as we moved, navigating the trail quickly with our feet. I felt the joy of it bubbling up the my chest, lifting me more easily off the trail as I ran.

We ran about 10 minutes when I stopped, thinking we had made enough distance to be a little more relaxed about the possibility of being struck my lightening, (one can never be sure, of course). I turned to Helen and said, “Man, that was kind of fun!”

“Whoooops,” I laughed to myself. My poor friend had been apparently terrified behind me while I blithely made my way along, enjoying the moment.

In any case, we made it back to the car, tired from a respectable day, a little soggy,  but happy with our adventure.

One thought on “Tripyramid Take Two”