The Bonds: An Eleven-Year Tick

Once upon a time, a 13 year old girl from rural New Hampshire went on a two night adventure into the White Mountains with her 8th grade class. It being the first time she had ever been out with people other than her family, she was amazed to discover how fun and awe-inspiring the mountains could be (sorry, Mom and Dad). (Side note: Mom and Dad are 100% responsible for fostering a love of hiking). She quickly became obsessed with looking over the maps of the area and discovered a magical place called “The Pemigewasett Wilderness” that could only be the deepest, wildest place in the universe. She swore she would one day venture into that great abyss and get her body onto those mountains that hid so deeply within it.

So, eleven years later, I’ve finally managed to do that, and though I can now say that I’ve been much deeper into the wilderness than the Pemi, it is still very much an abyss in its own small way.

My goal was to hike the Bond mountains, of which there are three: Mt. Bond, West Bond, and Bondcliff. The Bonds are special because it takes a little more effort just to get into the base of the hills, versus the highly accessible Franconia Ridge exactly to the West of the Bonds. I knew that I would want to do the trip in a day and a half, just to make the milage a little easier, and because sleeping outside is the best. So, I invited my friends Krystyna and Matt to come along, and off we headed. 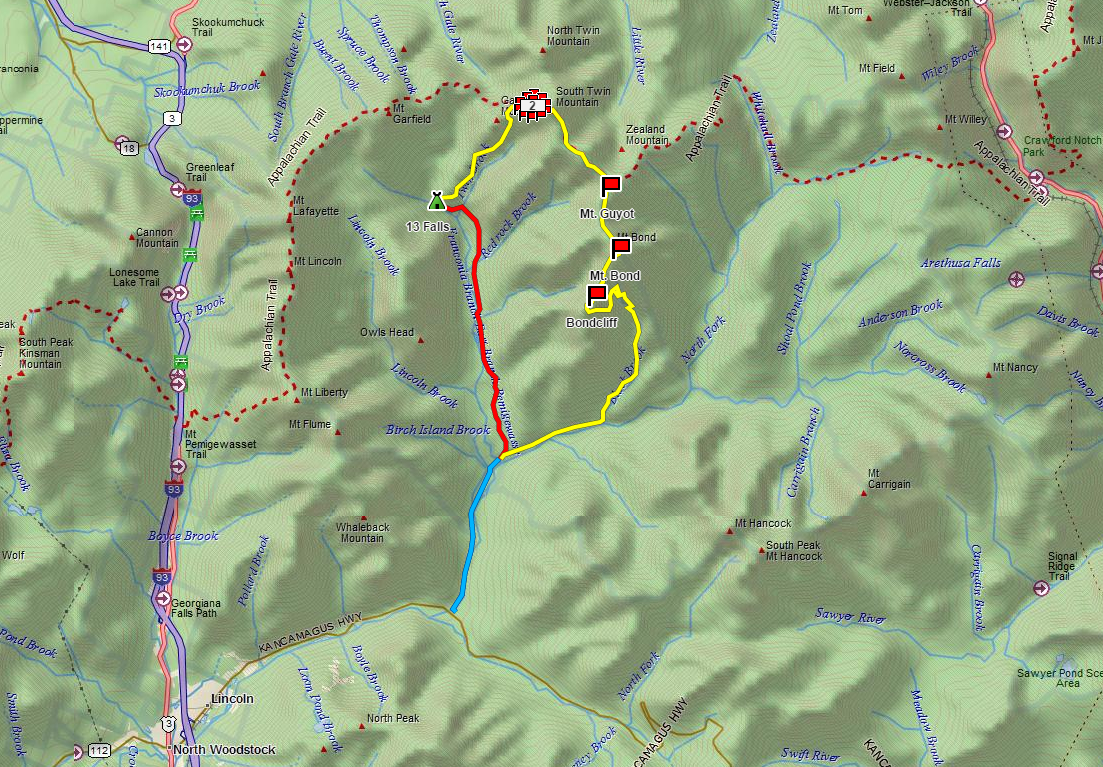 We accessed the wilderness via Lincoln Woods off the Kancamagus Highway where the old railroad bed from the logging days follows the Pemi river into the wilderness. This trail is so flat and boring that I insisted we ride our bikes to the crossing of the river at the joining of the brooks (the Blue trail). We stashed our bikes at the bridge and continued up the Franconia Brook trail about five miles.

The trail was quite flat, relatively smooth, and led us by marshes and brooks that were so New Hampshire it hurt. There were also a couple of creek crossings that required the removal of shoes- unless you are like Krystyna and can hike in your Chacos like a badass, then you just trudge through the icy water like nobody’s business. The trail was also the typical New Hampshire muddy, though the bug levels remained manageable throughout the walk. Starting at 3:00 in the afternoon, we arrived at the 13 Falls Campsite at around 6:30 pm, a nice, easy half day. The campsite sits snugly in a scrappy, dark spruce forest about 1/16th of a mile from the Franconia Brook as it rolls steeply off the hills. The bugs were barely tolerable here, but we thankfully had a convenient little tent to shelter us. After a quick and ridiculously convenient backpacking dinner we hit the hay around 8:30.

My alarm went off at 4:30 am as the haze of the sunrise began setting into the campground. We wanted an early start to catch the sunrise on the ridge, a short 2.5 miles above us.

Silly us, though, forgot that the sun rises at 5:00 am these days, and so we were still deep in the woods when the sun broke through. That first 1.5 hours of hiking was brutal for all of us. Nothing like an early morning haul to get the juices flowing. The section of trail between the 13 Falls site and the Galehead AMC hut had a surprisingly low grade, though it was a bit rough, rocky and closed-in just before the junction of the Franconia Brook trail and the Galehead mountain spur. 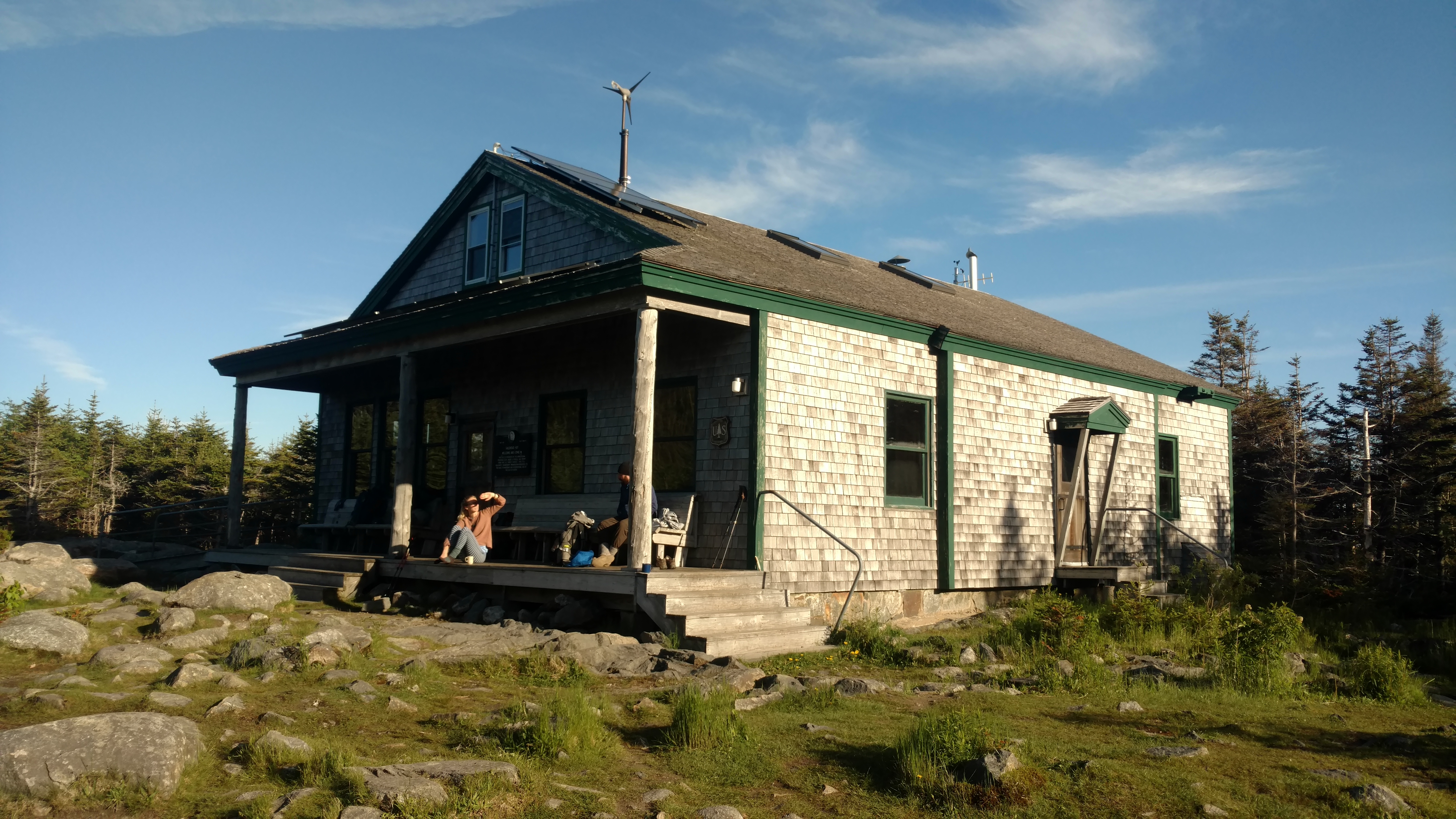 We arrived at Galehead Hut just as the caretakers were waking the guests for breakfast, around 6:30 am. We nabbed some leftover oatmeal and hot water from the generous caretakers, and chilled on the porch of the hut for a bit, enjoying the peaceful beauty of sunrise and the stunning view of the Pemi Wilderness to the south.

We had to continue soon, however, for we still had a solid 14 miles of walking to do that day. Leaving the hut, now on the Appalachian Trail, we began our ascent in earnest, gaining 1000 feet in a mile. The air was cool, and it felt great after our warm up to get the sweat going.

The first peak (of four) on our trip was South Twin, and it was quite the reward.

The coolest part about being on the Bonds is that we were almost smack dab in the middle of the White Mountains. From South Twin to Mt. Bond and Bondcliff, we could see from Mt. Washington, down to Mt. Moosilauke, a 360 degree view of basically the entirety of the Whites. It’s exhilarating to be so deeply in it.

After summitting South Twin, we turned south toward Mt. Guyot, the windswept peak that features high mountain grasses as its landscape. The AT takes a hard left turn to the East at Mt. Guyot, but we continued on the Bondcliff Trail, south to Mt. Bond.

Between each peak there was a short yet intense downhill walk, followed by lovely meandering through the spruce forests the populate the peaks of New Hampshire. We had another Spruce Grouse sighting for which Matt assumed his best David Attenborough position. It was all rather exciting.

The most exciting view for me, though, was descending Mt. Bond, looking out the the Bondcliffs, when I could see the trail we were going to use, the dwarfed people already out there on the hill. Looking out that way, I felt the exalting power of the mountains, the tension between wanting to reach my goal of completing my hike, and wanting to never leave the feeling of being where I was. 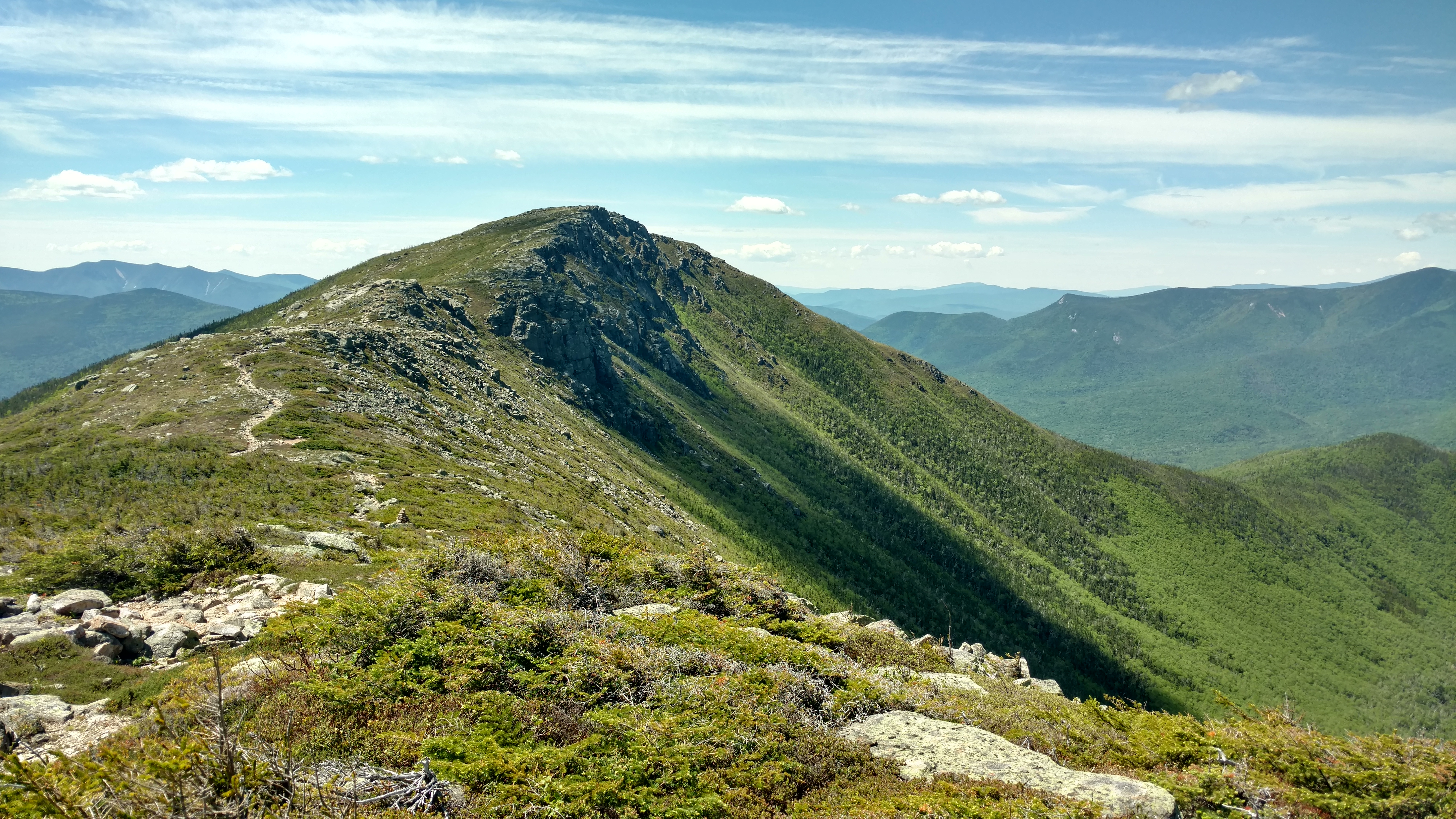 The last 3 miles of the hike were long. Once we finished our descent, it was another two straight, flat miles back to the river crossing to meet our bicycles. After being so clear and open up on the hills, the woods seemed hot and stifling. I had an acute sense of claustrophobia.

We escaped the forest without problems, however, and our reward was the three mile victory lap of riding our bikes back to civilization…not to mention achieving a goal that was 11 years in the making. 2 responses to “The Bonds: An Eleven-Year Tick”